To continue where we left off yesterday, this is Step Three in the series entitled How To Save Classical Music.  In this installment we will continue the interview with Klaus Heymann, Chairman of HNH International, the parent company of Naxos.  Today’s installment will focus on the third theme concerning how classical music needs to improve as well as additional comments and conclusions.

3.  Marketing and audience development.
Regardless of how well orchestras evolve into offering an engaging, interactive, and welcoming concert experience, it won’t do the industry any good if they are not able to reach a new audience.  In step two of this series, I mentioned the Knight Foundation report which determined approximately 4% of most communities patronize orchestra concerts.  But just outside of this small percentage, there is a much lager number just waiting to be tapped into.  I asked Klaus what he thought about this concept, and this is what he observed. 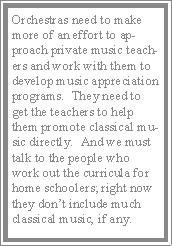 Klaus: Orchestras tend to be stuck into a formulated program when it comes to marketing.  We are all marketing to the initiated.  It’s been happening for so long that it’s become very difficult to break out of the mold format and in order to do so will take much more effort.  Not everyone is up to putting in that much effort for long term results.  We need to promise and event, or an experience, or emotion.

We are all complaining about the disappearance of classical music programs from public education.  But what are we doing about it?  Music Schools are full, there are 500,000 children learning to play the violin, cello, and piano using the Suzuki method.  Orchestras need to make more of an effort to approach private music teachers and work with them to develop music appreciation programs.  They need to get the teachers to help them promote classical music directly.  And we must talk to the people who work out the curricula for home schoolers; right now they don’t include much classical music, if any.

Klaus is one of the handful of few professionals in this business who I’ve encountered that realizes there are millions of potential patrons out there waiting for their orchestras to reach out to them.  I see orchestras pouring truck loads of money into marketing studies to develop a new audience. But they fail to recognize there is this large group of people who have demonstrated they are interested in classical music, or at least learning about classical music, by enrolling their children or themselves in private lessons.

Orchestras already reach out to public school music students en masse, but it’s those families which have an additional interest in music that sign up their children in private lessons.  Orchestras need to court these private teachers and build a relationship with them in order to help these them create a direct interest in attending orchestra concerts and listening to classical music among these families.  All it takes is the orchestra’s time and a willingness to show their appreciation for this side of the industry.

Here’s what some of the people from the Naxos ‘Saving Classical Music Competition’ thought about marketing and audience development:

4. Additional comments.
Toward the end of the interview I asked Klaus if he thought the situation for American Orchestras will get worse before they can get better or are they already on the path of improvement.  Klaus said,

Klaus: For some, they are already getting better, but others are moving so slow they will unfortunately have to continue to get worse before they change.

I then asked Klaus for his viewpoint on the financial condition of European orchestras compared to their American counterparts.  I was surprised to hear that he did not have as bright of an opinion as we’re used to reading about in the American press.

Klaus: Things in Europe are not all wonderful.  Many orchestras are getting amalgamated and positions are being cut.  Germany had a longer tradition because of sponsorship of the arts by the German princes and kings, but even that is changing because the money is running out.  I was talking to a German government official who is fairly high up in the cultural hierarchy of that country who told me “If we only had flexible work rules and knowledgeable and competent administrators in our performance institutions, we would not have to shut down orchestras and municipal music schools.”  Although I don’t think things are as bad in Europe as the U.S. yet, they are heading in that direction.

Compared to what is typically printed in the American press, this seems to be a much more realistic assessment.  Klaus isn’t just looking at comparing the two groups as they are now, but he sees many of the same trends in Europe that were happening in the U.S. several years ago.  And it’s fair to assume that unless they are able to change course they will have many of the same results.

Conclusions
After my discussion with Klaus and reading through the results from Naxos’ ‘Saving Classical Music Competition’, it becomes apparent that orchestras are going to need to reflect society more closely if they are going to survive.  At one point in the interview, Klaus said “competition is a reality and you have to address it”.

Orchestras are just starting to acknowledge that they are in competition with other forms of entertainment; cable TV, movies, DVD’s, sporting events, and video games.  All of these activities have one thing in common; they require time and money from the people that participate in them.  And that is money and time that they are not spending with their orchestras.  The industry can no longer point their finger at declining music education in public schools and then wait around for the government to reestablish those programs.  They will have to educate their communities on their own and go out into their neighborhoods and establish the justification for their existence.

It certainly won’t be easy and some groups will undoubtedly fail along the way.  But in order to save classical music and allow it to thrive in American society, many of these changes will need to come about.  The sooner we all start trying, the better.