Skip to content
Sometimes you just want to be told what to do. It isn’t that you’re lazy or averse to initiative but having a read to use idea can be the difference between thinking “I should do that” and actually getting it done. If that’s the way you’re feeling the Holly Mulcahy’s  contribution is precisely what you’ve been looking for. ~Drew McManus

Six Fail-Safe Ways to Get Your Concert On

By: Holly Mulcahy; violinist and author of Neo Classical, a blog about the future of classical music. 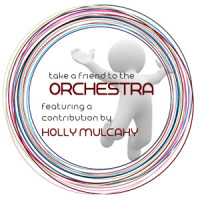 During this season I’ve enjoyed the honor of playing in several orchestras as guest concertmaster and one of the more enjoyable fringe benefits is a direct view of and/or direct contact with the patrons. There was a wide variety; everything from parents with children, groups of teenagers, date nights, and family nights to dinner clubs and drag queens.

But one thread that made its way from one group to the next was sharing the experience; and for my money, that adds instant value to any outing. If that weren’t enough, introducing friends to a night at the symphony is one of the greatest cultural keys one can hand over to another.

But asking a friend to a symphony can be a hard sell sometimes. Stereotypes abound but that doesn’t mean you should shy away from making them work to your advantage when possible. So, here is a sampling of a few ideas from my observations this season to create a group outing that will surely create a meaningful, enjoyable, and crazy-fun night at the symphony.

Those were just a few, but really there are so many themes and fun ways to share a symphony concert. The best part seems to be the memories created. Not only are people spreading the joy of classical music, but they are enhancing and improving on an already fun occasion. What else would you add to this list? Leave a comment and share!

X
TAFTO 2012 Contribution: David J. LoehrTAFTOI’m just going to say this up front. The friend I’m talking about isn’t technically a friend, and I still haven’t taken him to an orchestra. (And Drew…

524 min
X
TAFTO 2013 Contribution: Scott SilbersteinTAFTOOkay, my friends, let’s talk about what we’re going to do tonight. Maybe a trip to Orchestra Hall to hear the Chicago Symphony? Why, you ask, should y…