Skip to content
There’s no better way to end Take A Friend to The Orchestra week than with a patron contribution and today’s post comes from Heather Brown, a classical music enthusiast with mad culture blogging skills and the heavy duty take-a-friend goal of packing an entire balcony with fellow subscribers. Sounds like a perfect goal to me. ~ Drew McManus 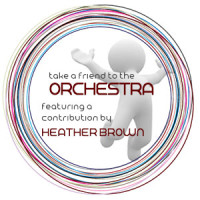 Thanks to my parents’ influence, I grew up playing and listening to classical music.  I also grew up loving sports.  Thankfully, Columbus, Ohio has both. Even with a terrific classical music scene though, Ohio State University athletics always seems to get the upper hand in this town.  OK, sure. Ohio’s a football state, but I think the two actually complement each other and have more in common than your average sports fan might think. So come on, Buckeye fans – how about a night at the symphony?

See?  Without music ensembles originally inspired by classical music, athletic teams would be without their main source of encouragement as well as without fan entertainment during halftimes and time outs. It’s that classical music inspiration that allows sports teams to win.  Without it, they’d lose and who really wants to cheer for the likes of the pre-Peyton Manning-era Colts again?  (Or the Chicago Cubs – not really sure.  I’ve always rooted for both anyway.)

Since classical music helps sports team win, my belief is that sports fans should help support classical music in return.  Just look at what they have in common and then let me know if you still can’t picture OSU’s Coach Meyer, Coach Matta and their athletes at the next concert showing their support for the CSO.

Marching bands play Holst in Ohio Stadium.  Pep bands play Rossini in Assembly Hall.  You’ve heard this great music before, now I encourage you to try out the original in the Ohio Theatre.

Support your favorite teams (and The Ohio State University Chorale) by joining me next Saturday, May 4th, at the Ohio Theatre for the CSO’s last performance of the season.  It’s never too late to try something new and my guess is that you’ll probably even recognize some of what you’ll hear.

Just think B for Buckeyes!  And Bach, Berg, Brahms, Berlioz, and Brown!

Never heard of Bach, Berg, Brahms and Berlioz – the four composers whose music is being played?  Who cares?  Had any of you ever really heard of Appalachian State before they beat Michigan?

As for Brown – well, that’s me and I would love for you to join me next Saturday.  So what do you say, Coach Meyer?  How about it, Coach Matta?  Student athletes?  TBDBITL alumni? You can find me in the center section of the rear balcony, Row R, Seat 110 after the pre-concert chat.  Please stop by.  Say hello and join me in embracing the paradox that is classical music and Big Ten sports teams. Join me in listening to the best damn orchestra you just might ever hear!

X
TAFTO 2013 Contribution: Ceci DadismanTAFTOTrying to get someone to go to the opera can be a challenging thing. As the chief marketing gal at Palm Beach Opera, it quite literally is my job to g…

1024 min
X
There’s a Downside To SuccessCompensation ReportsSimply put, business is booming. Back in January I published an article about the growth going on within The Venture Platform segment of my business a…