In the wake of the economic downturn, we’ve heard a lot about large donor burnout. The large donor well running dry is a frequent talking point during labor disputes and it’s common to see employers leverage permanent concessions as a demand from one or more existing large donors as a condition for continued giving. 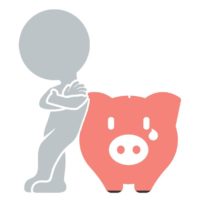 What started as a call for “sustainability” has risen to the level of nonprofit sacrosanct.

Is there truth to this notion or is it just a ploy to control labor expenses as a result of untapped potential?

This is one of those situations where reality is somewhere in the middle.

In many instances, many throughout the regular pool of large donors are burned out thanks to a string of bail out requests resulting from what seems like an endless stream of financial crises. At the same time, that pool of donors rarely comprises the full extent of benefactors with equal or greater philanthropic capacity.

This gray area of untapped donor is rapidly expanding and, spoiler alert, that’s not a good thing for anyone.

The 12/16/2017 edition of The Atlantic published an article by Helaine Olen that does an excellent job of providing a historical look at just how difficult it has been to get those with the most to embrace nonprofit giving at levels equal to donors that earn a fraction of their annual income.

As a group, the wealthy do donate more money overall, but as a proportion of earnings, many of them give less than those with far less wealth. The Philanthropy Roundtable, an organization of philanthropic groups, has found that while households with annual earnings of less than $50,000 were less likely to donate any money to charity than those earning more than that, if they did donate, they gave a greater percentage of their income than those wealthier than them. A survey by The Chronicle of Philanthropy released in 2014 reached a similar finding: Those earning $200,000 or more per year reduced their giving during the Great Recession and its aftermath by 4.6 percent, while those bringing home less than $100,000 upped their donations by very nearly as much—4.5 percent, to be specific.

Olen makes a point of illustrating this trend is anything but modern.

These dynamics are not unique to the present age of high inequality—they were a feature of the first Gilded Age too. Then, moralists complained the poor wasted their limited funds on alcohol, and community centers offered classes in budgeting. And way back in 1892, The Boston Globe published an op-ed arguing that the United States’ wealthiest citizens needed to give more money to charity.

The article continues with a recommendation that the only sure-fire way out of this miserly cycle is to institute higher tax rates on those in the highest tax brackets.

Most other developed countries tax people at higher rates, leaving their societal well-being less dependent on convincing individuals to donate to charity…If many Americans want the richest among them to give more, maybe taxation, not philanthropy, is the more effective approach.

Olen points out the dichotomy in that approach when considering the GOP tax plan, which is expected to be passed this Wednesday. If the plan goes through in its current, post conference committee form, there are fewer carrots than before and certainly and no sticks to inspire increased charitable giving among all tax brackets, not just the rich.

Regardless of individual opinion, one thing that seems clear is the issue of increasing large donor giving will continue to rest solely within our field. It will take the combined efforts of existing large donors, executives, and artists to discover which methods work best for inspiring increased giving among large donor community.

Anything less invites retraction, contention, and marginalized influence, all of which are the key ingredients for accelerating decline.

UPDATE: the 12/27/2017 edition of the Washington Post has an article by Robert O’Harrow Jr. that reports changes to the internal culture at the Internal Revenue Service is producing a sharp uptick in the number of nonprofits focused on partisan politics, many of which are attracting the largest of potential large donors. It’s a timely addition to include alongside the original topic when thinking about whether those efforts are diverting any contributed revenue that would otherwise go to culture based and charitable nonprofits.