I’m back from #18NTC (2018 nonprofit technology conference) and wanted to take a moment to provide some observations while they are still fresh in my mind. 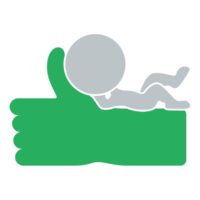 I took the time to move through as many sessions as possible, the bulk of which fell into the IT, Leadership, Marketing/Communication, and Program tracks.

Speaking of popping in and out of sessions, NTEN CEO, Amy Sample Ward, regularly reminded attendees about their two-legs approach, which encouraged attendees to move between sessions if one isn’t exactly what they originally thought. As a result, it was common to see at least half a dozen or more attendees pop in and out of every session I attended.

Sessions were well organized; NTEN staff were the very model of Johnny-on-the-spot making sure speakers were set up, audio/visual was working, and attendees weren’t having trouble with wi-fi.

One presenter who stood out was Jessica Meister, Web/UX Specialist at Oral Health America. Her portion of the “I’m Not the Dinosaur—YOU’RE the Dinosaur!” How Your Website Should Keep Pace with America’s Aging Population session was exceptional.

In addition to regular sessions, the conference offered “Connect” discussion forums. I attended the WordPress offering and found the casual group conversation format effective and inviting. Attendees were a 60/40 split between end users (nonprofits) and providers. Among those actively working at nonprofits, most had intermediate to advanced WordPress chops, which helped the conversation dive deeper into the subject material than if it were a regular session.

I took some time to chat-up the session moderator, freelance web developer Jason King, who has been attending NTC for several years. He is also one of the key figures in organizing the pre-conference WordPress Day event. I regret missing it and intend on correcting that mistake next year.

All in all, I was very pleased with how the session turned out. This was a brand-new offering and my co-presenter, Ceci Dadisman, and I have some tweaks in mind for future incarnations.

Ceci and I are continually refining our presentation game every chance we get to work together, and this latest offering brought some of our latest refinement gems to the session experience.

In addition to consistent graphic design, we went nuts on aggressive copy editing (as an aside, I was genuinely surprised at how many presenters crammed paragraphs of content into slides, used tiny font sizes, included loads of complex charts/graphs, and other design faux-pas).

Useful info…but that's at 4x zoom. I had to take the photo to read the text. #18ntc pic.twitter.com/k9vCmcpByT

To balance the info-zen approach, we took the time to include annotated speaker notes to the publicly available copy of the slide deck. This makes it easier for those viewing the deck outside the session setting to make sense of the slide information. I was beyond thrilled to see Joe Patti highlight this precise feature from our slide deck in one of his posts from last week.

Is there anything more gratifying than when your peers get you (thanks Joe!)?

Lastly, Ceci and I took the time to refine the slide deck template. Each slide had a color-coded footer that included the session hashtag (if unavailable, using a conference hashtag is fine) and the presenters’ Twitter handles. And since companion micro-sites are increasingly common with my presentations, the footer also included its URL.