As several of the larger budget orchestras have successfully completed collective bargaining agreement negotiations, it is high time to take a look at how the minimum base musician compensation in those ensembles has evolved over the past several years. When examining compensation data as far back as 1999-2000 season is examined, some intriguing patterns begin to take shape…

For this exercise, the larger budget orchestras consist of the “Big 5+2”; the traditional “Big 5” ensembles in that group are Boston Symphony, Chicago Symphony, Cleveland Orchestra, New York Philharmonic, and Philadelphia Orchestra. The “+2” ensembles are the Los Angeles Philharmonic and San Francisco Symphony.

Keep in mind the salary figures for these ensembles do not represent what the vast majority of professional orchestra musicians earn. Instead, these ensembles occupy the seven highest paid symphonic orchestra ensembles in the business.

Traditionally, these ensembles have maintained a very tight salary peer group but that started to change in the 2002-2003 season when the Los Angeles Philharmonic shot ahead of their peers only to move right back to the middle of the pack in the following season. Following that event, in the 2004-2005 season, these ensembles started to drift apart at a faster rate than previously experienced.

This trend continued to such a degree that by the current season, the ensembles have almost formed three distinct mini-groupings, with Boston and Los Angeles residing in the top layer, Chicago, New York, Philadelphia, and San Francisco occupying the middle, and Cleveland on the bottom.

Since professional orchestras negotiate base salary figures years in advance, albeit at different times and for different lengths, it is possible to see how these trends will continue to evolve. According to available data, the difference between the “Big 5+2” salary parameters will grow to $9,360 by the 2008-2009 season; its largest gap since the 1999-2000 season where that figure was only $3,640.

The following charts illustrate how the shifts in base salary have progressed in three distinct stages since the 1999-2000 season:

Finally, the following chart (click to enlarge) illustrates the entire pattern from 1999-2000 through the furthest known projected salary figure in 2010-2011. Note how the pattern resembles something of a shotgun blast with all of the orchestras tightly bound in the beginning but growing apart over time: 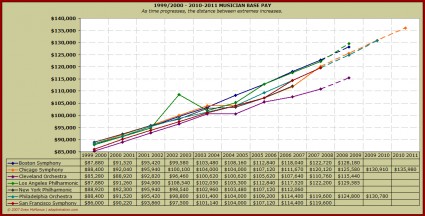 It is valuable to maintain a record of this data as one of the enduring positions among professional musicians is that staying as close to the top of the salary scale as possible allows them to be ideally suited to attract the “best of the best” players available. As the distance between the base compensation levels for the “Big 5+2” continues to grow, it will be interesting to see how those salary levels influence potential candidates.

Postscript: Thanks to the info below from Galen Brown, here’s a revised version of the cumulative chart which now includes the New York Philharmonic data through the end of their new collective bargaining agreement. 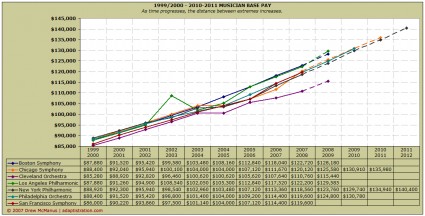 1 thought on “An Extended Look At Top-Tier Musician Compensation”

Full Of Sound And Fury, Signifying Nothing