It has been awhile since a good meme of four has gone around the cultural blogosphere so in the spirit of the holiday season, let’s start one: The Holiday Extremes Meme Of Four. Although garden variety memes are always great fun, wouldn’t it be entertaining to toss a twist into the mix. To that end, this is a meme of extremes, meaning for each holiday topic, you list the four most enjoyable and four least enjoyable… 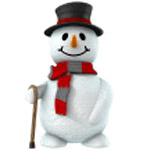