Like most of the Nashville area, the Schermerhorn Symphony Center (SSC), home of the Nashville Symphony Orchestra (NSO), is enduring the impact of severe floods. Located less than a few thousand feet from the banks of the Cumberland River, the SSC did endure intense flooding. I spoke with NSO president & CEO Alan Valentine, via cell phone yesterday afternoon to obtain the following details…

The flooding started on Saturday afternoon but the organization was able to conduct its regularly scheduled masterworks performance that evening. Only two musicians were unable to attend and even with extreme flooding and numerous closed roads and interstates, they had 850 in attendance. To give you an idea of just how much that says about their patron base, here’s a video report from CNN on the severity of flooding from the same afternoon as the concert.

The SSC is already fitted with pumps but in a show of just how much workmanship matters, the building’s contractor showed up on his own initiative with an additional 800lb pump and lowered it into the basement with a special crane.

“Pumping went fine and kept up with most of the water until the water table started rising on Sunday,” said Valentine. “The real problems started when the electric company gave us mere minutes notice that they were shutting off power. This didn’t give us enough time to move pianos, the organ console, and other items out of the basement.”

As a result, the NSO did lose those instruments along with the organ blowers and electronics. Additionally, all of the kitchen equipment, miscellaneous equipment, HVAC equipment, air handlers, and some of the duct work embedded into concrete are likely a complete loss.

Fortunately, the water stopped five inches shy of entering the ground floor level which contains the Laura Tuner Concert Hall and music library. NSO Head librarian, Wilson Ocha, worked with his staff and volunteer musicians on Sunday evening to move as much music as they could off of the bottom shelves. Fortunately, the library was unharmed. Also unharmed was the public courtyard, which the staff is currently using as an ad hoc work area.

Efforts to assess the damage are already underway but the organization will have to wait until the water recedes before a thorough analysis can be conducted. The organization has discovered that the concrete slab floor of the chair wagon storage area immediately below the concert hall has been damaged and may need to be entirely replaced. However, when designing the building, thoughtful efforts directed toward structural engineering look like they will pay off sooner than later.

“When we designed the building’s foundation, the caissons were set right into bedrock so we should be fine on foundation issues,” said Valentine.

In an ironic twist, Valentine mentioned the caissons were the first aspect of the building process that went over budget but sensing their importance, the organization mitigated the cost through additional fundraising. Valentine made certain to mention that yes, they do have insurance so much of the lost equipment will be able to be replaced.

He also mentioned that on Tuesday, they relocated the organization’s servers to a backup facility and had email, box office, and website functionality back online. Even though the administrative offices were not damaged, they won’t be able to use them until the building’s electrical and HVAC systems are restored. In the meantime, they’ve also received an offer from a local bank wanting to donate office space.

Perhaps most importantly, the NSO has already managed to relocate its final masterworks concert to the Tennessee Performing Arts Center. Plans are in motion to confirm locations for their remaining concert events and summer season.

“Our job is to play music and that’s exactly what we’re going to do,” said Valentine. “It’s what our citizens expect and deserve so you can be sure that we’ll find a way to make that happen.”

To provide a better image of the flooding around the hall, here are some photos from the past several days. 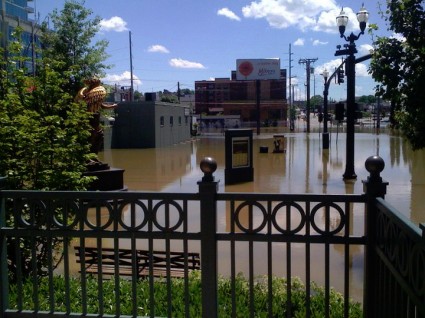 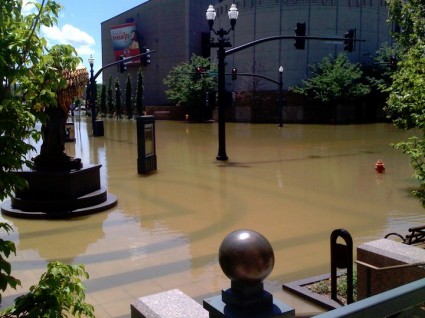 Update: The Tennessean posted video of the flooding.

3 thoughts on “Doing Their Jobs In Nashville”