This year’s program includes a number of contributions from those within the tech sector of the arts field. Our initial offering is from Even Schumacher, co-founder and programming guru of InstantEncore.com; a group most folks are certainly aware of. Due to his background, I felt Evan’s approach would be similar to the sort of patron perspective we enjoy each year and I’m sure you’ll agree that his efforts are right on the money. ~ Drew McManus

San Diego’s New “Take a Friend to the Orchestra” Experience
By: Evan Schumacher 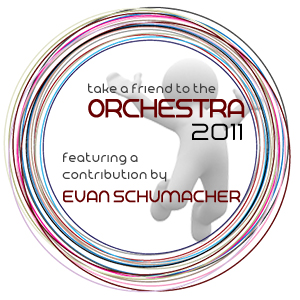 In 2007 two of San Diego Symphony’s young musicians changed my expectations for a classical music concert. They did what many consider impossible by creating an event that stimulates long time classical music fans and at the same time being open and engaging to newcomers. While classical music struggles to remain relevant in the flood of the digital age, the chamber music series that Kate Hatmaker and Demarre McGill have created, Art of Elan, shows how it can thrive. It is an experience that has allowed me to share classical music with my friends who would never have sought it out on their own.

Each concert follows a similar recipe:

The vision of Kate and Demarre has blossomed into one of San Diego’s premier artistic events. Now in its fourth season, Art of Elan concerts are packed (and often overflowing) and have received critical acclaim (see here, here, here and here).

Just as important as the acclaim from long time classical music fans is that new comers are enjoying it, too. Much of this can be explained by the event surrounding the event. After the concerts, all the musicians can be found right outside the gallery ready to meet the audience. Classical music is much more accessible when you realize that the artists are people just like you. It’s one thing to see a great performance, it’s another to put a face and name to it. But the event doesn’t stop there. Everyone in the audience is welcome to join the co-directors and musicians at The Prado, the hip restaurant just outside the museum, for food and drinks and to continue the lively evening.

In a 24/7 Internet connected world, it takes more than a single good event to build an audience, though. Art of Elan has tackled this problem by using the technology to stay connected with their audience even when they aren’t performing. At each concert, audience members are given a business card with a “download code” that allows the user to download the concert they just heard. On the day after the concert, the download codes can be redeemed for free at InstantEncore.com (disclosure, I’m a co-founder of InstantEncore) so that the audience can re-live the experience – or share it with friends. And when people redeem their code, they can “Become a Fan” of Art of Elan, which means they’ll be alerted when the next concert is coming up. Art of Elan also allows anyone across the globe to stream their concerts online from their InstantEncore page (instantencore.com/artofelan). By using technology, Art of Elan maintains mind-share until their next concert.

What makes Art of Elan unique and special for me is that it has created an experience that makes me want to take my friends to a concert. More importantly, they’ve created an experience that will make my friends want to come back. This doesn’t have to be unique to San Diego, the ingredients that go into Art of Elan can be found throughout the United States. We have no shortage of talented musicians, new music, interesting venues, people who want to experience culture, and sharp minds who want to see classical music grow. If all of this can be combined then classical music will flourish throughout the 21st century.

Visit this contribution at the TAFTO Resource site.

Evan Schumacher is a co-founder of InstantEncore, a technology company that provides services to artists and arts organizations to help them reach and grow their audience.  At InstantEncore he helped design the digital asset management system that drives the online and mobile presence of artists and arts organizations around the world.  He specializes in the technical aspects of the service including system design, database architecture and web services.  He received his Bachelor of Sciences and Masters Degree from the University of California at San Diego in Electrical Engineering with a focus on Computer Vision.

X
TAFTO 2011 Contribution: Timothy HankewichFeaturedI've only met one music director who smiles and laughs as much as Orchestra Iowa music director, Tim Hankewich. In fact, you can actually hear Tim's s…

264 min
X
TAFTO 2011 Contribution: Sean HickeyFeaturedSean Hickey is no stranger to Adaptistration's regular readers. He's been a guest author on a few occasions and always manages to make you think about…