Skip to content
FacebookLinkedInEmailCopyPrint
Looking for Glenn Dicterow’s concertmaster compensation? It’s available in the concertmaster installment from this series.

We all know that the 2008/09 season was the first to endure the brunt of the economic downturn but that doesn’t mean the average music director didn’t enjoy at least a small bump in compensation just under two percent. At the same time, compared to executives, and to a lesser degree base musician compensation, music directors experienced the smallest increase of any stakeholder… 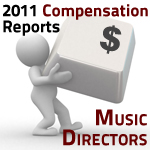 Thanks to the use of dynamic sorting tables, the 2011 Orchestra Compensation Reports can combine and display all of the data from both ICSOM and ROPA executives in a single chart. This means you can interact with the data and arrange it in a variety of ways; high/low compensation figures, total expenditure, conference or group, alphabetic by name, etc.

In order to provide information that is as accurate as possible, data from the 2008/09 season is gathered from the following sources:

For the first time in the history of the Orchestra Compensation Reports, an orchestra not only failed to provide music director compensation in their respective IRS Form 990 but they refused to acknowledge direct requests for the information. In this case, the Cincinnati Symphony Orchestra did not list any music director compensation nor did their finance department return multiple telephone messages requesting the data and/or an explanation why it wasn’t included in their IRS Form 990. Unfortunately, I am very sad to say that if I don’t hear from the organization by the end of business today, I will have to file a complaint with Internal Revenue Service, TE/GE Customer Account Services department via their established guidelines.

This is something I sincerely do not wish to do.

However, it is fair to point out that with a few minor and infrequent exceptions, the vast majority of organizations I have contacted over the years with requests for compensation information and/or clarification have been more than happy to provide the information.