There’s nothing quite like an old media vs. new media discussion; you can always count on it producing a few worthwhile bang-your-head-against-the-wall moments but the potential entertainment value doubles when the discussion panel is comprised of music critics. Case in point, there’s a fantastic blog post at sfciviccenter.blogspot.com that provides a firsthand account of a discussion panel from the 2011 Music Critics Association of North America annual meeting. 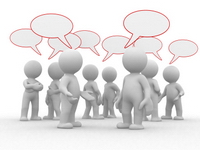 What’s particularly compelling about this account is how the author was struck by how little most panelists seemed to understand about new media to begin with.

It was fun seeing a number of famous faces…but with a few exceptions the panel was remarkably ignorant about “new” media.

I don’t want to spoil the fun but if you’re pressed for time, here’s the short attention span summary:

As someone who enjoys image enhanced blog posts, I appreciated the author’s inclusion of what I assume are his personal digital pics of each speaker during his/her respective presentation. To that end, it was tough to miss out on how the author noticed Veltman pining for foundation support and expressing frustration over having to pay “a mere pittance” to one of her radio show staffers while simultaneously sporting a pair of Dolce&Gabana sunglasses atop her head during the presentation.

There’s a situational irony punch line there somewhere. Until we find it, check out the full blog post.

X
Terry Teachout Couldn’t Be More RightFeaturedAfter a stretch of swing-and-a-miss articles from the venerable Terry Teachout, he connected with a big hit in his Wall Street Journal article from 3/…

262 min
X
Stop Being Such A Control Freak And Be Glad For The Yelp…MarketingAlthough it might not make Michael Kaiser or Rocco Landesman very happy, the growth of citizen critics and independent reviewers is beginning to have …