Not every generation gets to live during a period of major transition but everyone in the business today is lucky enough to witness what I like to call the dawn of the executives. For reasons I don’t remember (likely due to the gin being consumed during the conversation), a colleague and I were talking about the how the business has evolved over the past few decades.

Both of us have similar backgrounds in that we made the shift from music performance to arts management. As such, we decided to take the conversation another step by inserting some music history and after awhile, we determined that there have been three major periods of history where one group of stakeholders have had the more impact over others on the overall artistic direction of classical music; composers, soloists, and conductors.

It didn’t take long to determine that when applying the same criteria used to establish those three groups, it becomes clear that conductors are being steadily replaced by the executive class. We pondered the ramifications of this shift in influence but I didn’t think much of the conversation until months later during some email exchanges with Adaptistration’s resident editorial cartoonist, Dixon, at which point he summed everything up in only the way he can. Share and enjoy. 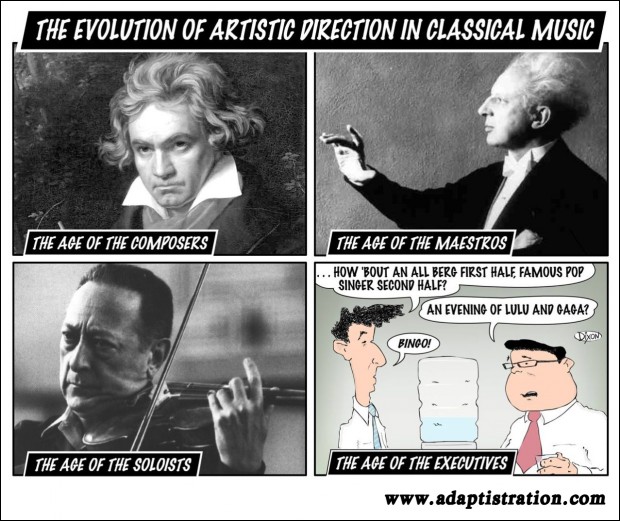