As a follow-up to The Ugly Website article from 11/28/2011, I wanted to take a moment to cover something I left out of that piece but is a crucial bit of information everyone needs to be aware of. 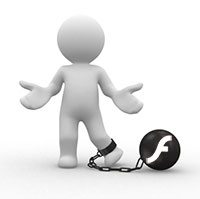 It was summed up best among the stream of useful tweets coming from session attendees when one of them captured the following phrase from my portion of the session: “Flash for mobile is dead. Get Flash off your website.”

Although the news certainly made the rounds throughout the tech blog circuit it hasn’t really made much of an appearance in the arts tech niche, but here’s the key piece of info you need to know; in early November Adobe announced that development on a Flash Player for mobile devices was officially discontinued.

Thanks to the popularity of iPhones and its long standing incompatibility with Flash, a comparatively large swath of Smartphone users regularly encounter frustrating series of broken links and unusable websites that rely on Flash generated functionality.

And even though it was entirely understandable for orchestras which rely on Flash to adopt a “wait and see” approach pending the outcome of Adobe’s Flash Player for mobile devices efforts, the time has come to accept and acknowledge that is not going to be an option.

Here’s What You Need To Do

First off, don’t panic. Your online presence isn’t going to suddenly come crashing down around you, but you do need to adopt the following measures as they apply to your situation:

This process isn’t something you want to bury your head in the sand over so the sooner you jump into it, the better.

0 thoughts on “Put The Flash Down And Step Away From Your Website!”

X
The Ugly Website RoundupConference and ConventionsNo, this isn't an official installment in the 2011 Orchestra Website Reviews, instead, it's a recap of the Your Website is Ugly! session from the Nati…

Put The Flash Down And Step Away From Your Website!

233 min
X
Get Ready For The New Google AnalyticsWeb/TechThanks to my blogging colleague, Joe Patti, for pointing out a tremendously useful article at mashable.com from 12/1/2011 by Rachael Gerson that does …