In case you’ve been missing it this week, a bit of YouTube viral madness has been making the rounds thanks to a video created by New York Philharmonic trombonist David Finlayson, who attached a GoPro camera to the slide of his trombone. The resulting slide POV clip caught made the rounds through network morning programs and even the Rachel Maddow show on MSNBC. So what could be better than a video of one trombone slide POV? Well, a duet of course.

Enter National Symphony Orchestra principal trombonist, Craig Mulcahy, who was apparently working on a similar project at the same time as Finlayson. And as it turns out, the etude Finlayson played in his video has a duet part, which Mulcahy recorded and synced alongside Finlayson.

The entire thing is genuinely cool and terribly fun to watch. If nothing else, it leaves me wondering how far you could stretch this out, how about a trombone ensemble POV slide cam made with trombonists from across the country?

At his blog, Mulcahy indicates there are more videos to come so I suppose we’ll all have to stay tuned.

3 thoughts on “Two Heads Are Better Than One” 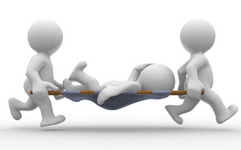 The Unfriendly Skies Can Be A Funny Place

Two Heads Are Better Than One