The 3/13/13 edition of the Wall Street Journal (WSJ) published an article by Scott McCartney that focuses on the growing perils of musicians traveling with instruments on commercial flights. The focus of the article was cellist (and Inside The Arts author) Lynn Harrell and his well publicized commotion vis-a-vis Delta Airlines, but what helps McCartney’s article stand out is his focus on one frequently overlooked point.

The Ultimate Cost Is Passed Along To Ticket Buyers 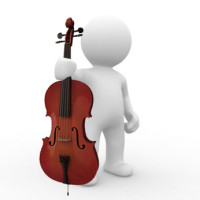 In both the print and video versions of the article, McCartney is very clear about mentioning that cellists use the frequent flyer miles accumulated by their instruments to help marginalize ongoing airline travel costs. In turn, this provides some degree of cost control measures so whenever airlines pull a stunt like the one where Delta not only deleted the miles accrued by Harrell’s cello but also Harrell’s miles (cumulatively five hundred thousand miles), the people who ultimately pay the price are classical music ticket buyers.

Cellists say earning miles on their extra seats is important to defray high travel costs when orchestras around the world are struggling financially. Buying two tickets for a prominent soloist—especially if the tickets are $7,000 business-class international seats—can dissuade some orchestras, or cause them to book a pianist or violinist who wouldn’t require an extra airline seat. So cellists use miles to buy seats for instruments or upgrades.

Perhaps some might consider the point inconsequential but for some orchestras, especially those in the small to mid budget range, having a cello soloist use miles to control travel costs can be the difference between ever hiring a cello soloist in the first place.

On a fun note, McCartney (or someone at the WSJ) came up with the entertaining idea of attaching a video camera to Harrell’s cello case in order to get a first hand view of what it’s like for a cellist checking in at LAX airport. Although the camera wasn’t allowed at or past the security gate, it did capture some fun footage.

Personally, I’d love to see what it would capture at the boarding gate which is where musicians experience the most anxiety over whether or not the gate agent will let the instrument on board and if so, will anyone on the aircraft overrule the decision, etc. Having flown with enough cellists on more than a few dozen instances, the experiences range from nothing out of the ordinary, to being treated like a minor celebrity, to an incredible amount of frustration thanks to overly hostile airline employees.

And then there are the other passengers; where I once witnessed a woman demand to speak to the captain because this “cello thing” was seated next to her.

Oddly enough, she didn’t complain when midway through the transatlantic flight she was using the case to secure a far more comfortable sleeping position than she would have been able to achieve had the seat been occupied with another snoring passenger.