There’s a terrific article by Janos Gereben in the 3/25/2013 edition of the San Francisco Classical Voice that begins to push past much of the talking point fluff coming from the San Francisco Symphony (SFS) and its musicians. In short, there’s plenty of ambiguous spin and attempted caginess to go around; all of which only makes the entire labor debacle look that much worse. But the part which should catch your attention is toward the end when the focus turns to proposed work rule changes. 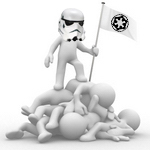 Regular readers already know how much of an impact work rules changes can have on the overall collective bargaining agreement thanks to the series of articles earlier this season which examined several segments from the Minnesota Orchestra Redline Agreement. Consequently, confirming the details behind the alleged work rule changes could shed a considerable deal of light on the otherwise murky issues surrounding the SFS labor dispute.

Unfortunately, Gereben apparently ran into a brick wall while trying to find out if there’s any fire at the source of the work rule smoke.

The question of “work rule changes” remains a mystery as the union doesn’t specify them, and management claims to have no information about what they may be.

In order to help sort through all of this I contacted the respective representatives for the SFS and the musicians; SFS Director of Communications, Oliver Theil, and musician media consultant, Nathan Ballard.

I asked both individuals the same question based on the excerpt from Gereben’s article; specifically, whether or not the SFS has included any work rule changes in either the three year or the most recent two year proposal; and if so, what are the details for each of those changes.

At the time this article was published, and if the musicians hope to turn around a public relations campaign that arguably started off on the wrong foot and kept hopping in the same direction, they will begin to demand more from their paid representatives when it comes to timely communication. UPDATE 3/26/13; 9:20am CT: Mr. Ballard provided a vague response related to the musicians’ complaints.

Management has asked for changes in the Musician’s [sic] work schedule in order to accommodate their proposals currently on the table with regard to revenue enhancing opportunities.

Currently, I am awaiting a reply to a follow-up inquiry that once again asks for details regarding specific changes to existing work rules. An update will be published when/if it is received.

Theil responded within minutes and affirmed that he was unaware of any musician assertions.

I have not heard the musicians publicly state any specifics about work rule changes. As I am not in the negotiations myself, I can only comment on their public statements.

Although that’s a wonderful PR adaptation of the Jedi mind trick, these were the droids I was looking for and it is fairly clear that they know something about proposed work rule changes; consequently, I followed up with Theil in an attempt to learn more.

DM: I apologize if I was unclear in my previous note. I’m not asking for any sort of response to musician statements…what I am asking is if the SFS has included any work rule changes in either the three year or the most recent two year proposal; and if so, what are the details for each of those changes.
OT: When he asked me about what specific work rule changes the musicians might be referring, I told Janos that I do not know to what they are referring, and could not venture a guess since I can only go by what they have said publicly. I honestly do not know what specific work rule change they might be talking about in their statements. Every CBA negotiation includes a variety of discussions of work rules such as the scheduling and duration of rehearsals and concerts or touring conditions, schedules and per diems, run-out frequency etc. But again, it would not be fair for me to venture a guess as to what specific work rule they are referring in their comments.

DM: Thanks again Oliver but to be exceedingly clear here, I am not asking you about musician statements. Instead, I am asking you whether or not the SFS has included any work rule changes in either the three year or the most recent two year proposal; and if so, what are the details for each of those changes. Thank you in advance for providing those details.
OT: Thanks Drew, I do not have any specifics to share around work rules discussions as part of our CBA negotiations with our musicians.

If nothing else, it seems as though there is certainly something going on regarding work rule changes but neither side seems willing to provide any details.

In the end, playing close to the chest might be a good strategy for poker but wears thin in scenarios such as this where patrons and supporters are already growing weary of brinkmanship.