The Minnesota Orchestra Association (MOA) moved another minute closer to doomsday this week in the wake of three key events: Music Director Osmo Vänskä’s publicly stated threshold for resignation, the loss of principal clarinet Burt Hara, and a commentary article authored by two members of the MOA negotiating committee which appeared in the 4/26/2013 edition of minnpost.com. In this case, doomsday is marked by organizational collapse and subsequent liquidation bankruptcy. 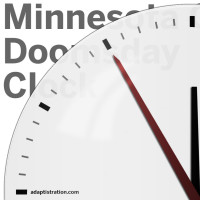 The minnpost.com commentary piece, authored by Nicky Carpenter and Greg Pulles, is officially a response to an open letter written by the musician negotiating committee and addressed to MOA CEO Michael Henson that appeared at the same publication on 4/16/2013.

The Carpenter-Pulles letter demonstrates just how far the dispute has sunk. Relying heavily on what some might define as a self indulgent and juvenile approach, the duo chastise their musician counterparts for using the press to rattle sabers and actively avoiding negotiating; all while adopting the very same tone and approach they are criticizing.

Neither letter offers any new information and only demonstrates how firmly entrenched stakeholders remain.

A Picture Is Worth A Thousand Words

Just in case there were any remaining naysayers left out there who don’t believe orchestra musicians have viable employment options other than their current position, the latest Minnesota Orchestra musician to leave is principal clarinet, Burt Hara, who recently won a position with the LA Philharmonic.

In Detroit, they left; in Louisville, they left; and in Minnesota, the artistic brain drain continues. To help illustrate this point, the MOA musicians have been cutting out members that have left for other opportunities from an orchestra photo. Hara is the latest ghost to be included, which brings the musicians’ tally to 22 members.

Time Is Running Out

Lastly, the 5/2/2013 edition of the Star Tribune published an article by Graydon Royce that reports MOA music director Osmo Vänskä has stated that he will resign his position if the orchestra is not playing again by September, 2013. According Vänskä’s letter, he now believes that the MOA has let the orchestra’s commitment to musical excellence come under threat.

The last time Vänskä issued a public statement was toward the end of 2012 and insider scuttlebutt reports that orchestra’s leadership told Vänskä in no uncertain terms that if he spoke out again about the work stoppage, it may rise to the level of just cause dismissal and cancelation of his work agreement.

From that moment forward, he has more or less stayed under the radar but it seems that Vänskä’s tolerance has reached an end. At the time this article was written, there was no response from any of the MOA’s leadership or designated spokespersons; however, I have sent a message to the MOA’s public relations department seeking a statement. Once a response is provided, this article will be updated with that information.

I have been proud and privileged to serve as Music Director of the Minnesota Orchestra since 2003. During that time I have done everything in my power to develop and sustain a world class body of performing musicians who have increasingly won international acclaim for their concerts, touring and recordings.

At this time, I wish to give formal notice of my sincere belief that the musical policy of excellence in symphonic music programming, which is the Minnesota Orchestral Association’s stated goal, and which the players, Board of Directors and international audience expect and deserve, is now under critical threat. As well as the impossibility of rehearsing and performing, which is crucial to maintaining standards, it is public knowledge that several orchestral musicians are leaving their posts; and it is my responsibility to inform you that our concertmaster has personally advised me that she has been offered two alternative positions elsewhere in the country. Although she does not wish to leave the Minnesota Orchestra, she will be compelled to do so if the labor dispute remains unresolved.

As an employee of the Minnesota Orchestral Association it is my duty to advise you that under these circumstances, my own position as Music Director may become unsustainable. I have already stated previously that in my professional opinion it is vital that the orchestra rehearse and perform during the week of 27 May 2013 in order to recommence the building up of quality necessary for the opening months of the coming season, including our planned recording sessions for BIS and our Carnegie Hall engagement. I have additionally requested that Yevgeny Sudbin play during my summer week commencing 22 July 2013 – again to prepare for the September recording.

At the very least, as an emergency option if playing does not recommence during May, it will be necessary to re-start work with the orchestra around 6 September 2013 – or at the latest 9 September 2013; and Yevgeny Sudbin will need to be present during that period in order to prepare for the recording sessions starting on 16 September 2013. I consider it extremely important to make the recordings in September as planned – both in terms of maintaining our record/release schedule with BIS; and as a part of the preparation process for Carnegie Hall.

The Carnegie Hall project represents for me one of the most significant goals of my entire Minnesota Orchestra tenure. I wish to do everything possible to ensure those concerts go ahead.

But at this time I must make it clear, that in the case Carnegie Hall chooses to cancel the Minnesota Orchestra’s concerts this November, i.e. if they lose confidence in our ability to perform those concerts as a result of the extended lockout, then I will be forced to resign my position as Music Director.

For the time being I will of course continue fulfilling my duties and obligations under the terms of my current employment agreement.

I trust you will share the contents and message of this letter with the entire Board.