The public relations campaign in the Atlanta Symphony Orchestra (ASO) labor dispute is unfolding in an entirely expected fashion. The initial one-two combination punch came from the ASO in the form of concert cancellations followed by an infographic designed to reiterate their existing talking points. Perhaps unsurprisingly, both sides of a labor dispute tend to exaggerate talking points throughout the course of a dispute but the ASO’s recent efforts cross the line from spin to misrepresentation.

Among the first to notice was Norman Lebrecht, who published a post on 9/23/2014 that asserts the ASO’s infographic “represents the musicians’ starting position, not the compromises they had offered at the point they were shut out.”

I contacted Atlanta Symphony Orchestra Players’ Association (ASOPA) Vice President and ASO Associate Principal Cello Daniel Laufer to validate Lebrecht’s report and he said that the ASO’s infographic mixes elements from multiple versions that have evolved throughout the course of negotiations and ultimately misrepresents the musicians’ positions.

“The [ASO used] some of our latest proposal but shaded it as well when it comes to the complement, to the actual salary increases, and healthcare assertions,” said Laufer. “So in short, no it is not our starting position but our current position is not reflected in total accuracy either.”

We believe that the Musicians’ goal – and that of many members of the ASO community – of a peaceful and timely settlement that will restore the Orchestra to the music-making that defines it and all of us is eminently achievable. Certainly it requires that the ASO/WAC’s commitment — that our deep concessions of 2012 were a one-time event —- be honored.  The ASO/WAC’s current proposal not only does not respect that commitment, but also unconscionably cuts even further into the artistic integrity and protection of our much-reduced livelihood that our CBA provides.  As the expiration of the contract looms, we have decided to make a new proposal that compromises our goal of a longer-term agreement, and further reduces our compensation.  Please note that under the terms and conditions of the Musicians’ proposal, it will not be until the fourth year of the Agreement  that the musicians’ compensation package would reach that in effect in 2012, without even taking inflation into account. That proposal follows:

ASOPA Reiterates our proposal from 8/28/14

ASOPA reiterates its proposal for an increase in the amount of one hundred percent (100%) of each Musician’s contribution to the Healthcare Insurance Premium instituted in the current 2012-14 Agreement to $20.00/week for the duration of the new Agreement. In addition, we propose additional cost savings through creative levers we can utilize in order to exceed the Healthcare savings ($237,866) proposed by Management in its August 16, while respecting the needs outlined in the final healthcare paragraph of our previous proposal.   These savings are illustrated in the following table:

We already have a development subcommittee of ASOPA members who works with management on various fundraising ideas.  ASO musicians remain willing to assist in donor calls and events whenever possible.

A philanthropic gesture offered to ease the planning and reality of the transition to retirement (which is especially difficult and counterintuitive during a period of lesser earnings such as have been experienced in the last several years), while potentially generous, does not have a place in the CBA.

We reiterate the modification and reasoning as stated in our last proposal (September 4, 2014):

The Orchestra Complement shall be restored to 89 Musicians by Year 4.  A side letter that shall be part of the Agreement shall spell out the following restorative process:

Year 1: A complement of 84 musicians shall be achieved through the CBA language set forth in Article X.2.

Year 2: A complement of 86 musicians shall be achieved through the CBA language set forth in Article X.2.

Year 3: A complement of 88 musicians shall be achieved through the CBA language set forth in Article X.2.

Year 4: A complement of 89 musicians shall be achieved through the CBA language set forth in Article X.2.

In all other respects, except for making date adjustments to conform to the term of the new Agreement,  ASOPA proposes that the current Agreement continue in effect as written.

Finally, to manifest our good faith further, explicitly wishing to prevent  the labor dispute the ASO/WAC seems determined to create and avoid the harm it would cause the institution we hold so dear,  the Musicians intend to continue to work under the terms of the 2012-14 Agreement while we work together to reach a new agreement.

The ASOPA committee and the union reserve the right to add to, subtract from or in any way modify the foregoing proposals at any time prior to settlement and ratification. The Agreement is subject to ratification by the musicians (ASOPA), the Union and the ASO.

Another curiosity is the ASO’s decision to present terms that currently exist in the collective bargaining agreement (CBA) as new language. The item in question is the Revenue Surplus clause and the ASO presents it in such a fashion as to exaggerate a position of benevolence while simultaneously portraying nonexistant musician intransigence. As it turns out, Laufer confirmed that the musicians have agreed to the clause in a new agreement so it should come as no surprise that it would not be in their proposals. 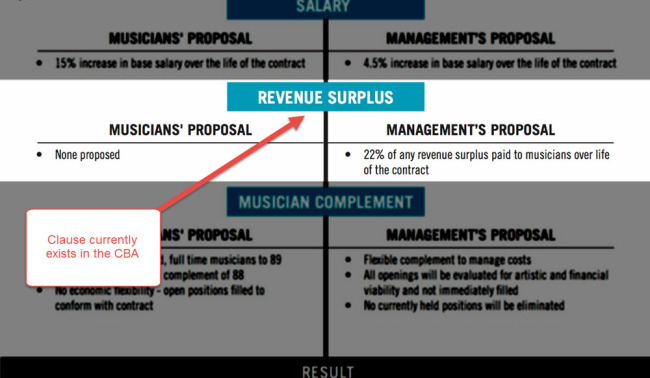 Surplus Compensation: When the ASO reports an Operating Surplus, as defined below, in any fiscal year during the term of this agreement, 22% of such surplus of up to $3 million shall be distributed in a Surplus Payment to each musician who was employed at the end of such fiscal year in an amount equal to the ratio of each musician’s contractual compensation to total orchestra compensation multiplied by the amount of the aggregate Surplus Payment. For purposes of this section, Operating Surplus is defined as the excess of operating revenue over operating expenses, reported in the audited financial statement of the Robert W. Woodruff Arts Center, Inc., for the ASO, in accordance with generally accepted accounting principles, after excluding any revenues recognized in operations that are repurposed from funds already accounted for in the books of the Robert W.Woodruff Arts Center, Inc. (not including normal distributions from the ASO’s endowment per the then existing spending policy adopted by the Investment Committee of the Robert W. Woodruff Arts Center, Inc.). Any expenses incurred for or benefits realized from the annual actuarial computation related to the musician’s frozen pension are also excluded.

Although the ASO has been contacted to ask why they used elements from both outdated and current bargaining positions plus presented revenue sharing as a new term when it already exists in the CBA, the organization has yet to respond.

1 thought on “A Perversion Of Perspective”

A Perversion Of Perspective

3565 min
X
The Situation In Atlanta Continues To DegradeNegotiationsIn what has become one of the more confusing turn of events in the Atlanta Symphony Orchestra (ASO) lockout, the management released a statement on 9/…