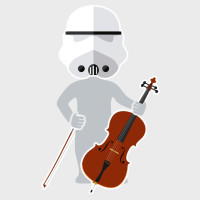 If you’re feeling down over the impending death of classical music (don’t worry, it’s not dying) then take a moment to watch this clip of the 7/10/2015 Star Wars: The Force Awakens comic-con panel featuring director JJ Abrams talk about the importance of orchestral music.

If that weren’t enough, Abrams just turned a live orchestra concert by the San Diego Symphony into the biggest fan event in the history of Comic-Con; it’s worth pointing out for those who may unaware that an accomplishment of that magnitude is not an easy task. Here’s how one self-described jaded journalist for wired.com, Angela Watercutter, reported the event (emphasis added).

Once everyone was into [the concert] Abrams and his cast (yes, like everyone who was onstage for the panel, including Harrison Ford, who used his lightsaber like a cane) took the stage and introduced the night’s entertainment: a full set of John Williams’ greatest hits, complete with clips from the films…After that, joy. Everyone put on their favorite fan gear (T-shirt, Wookiee hoodie, you name it) and took it in. It was less than an hour, but there were fireworks…as well—and nothing reminds fans how good that theme song is like hearing it played by a full orchestra.

As a journalist, it’s easy to get jaded once you’ve covered enough Comic-Cons. Crappy, I know. But even though every con has its massive fan-gasm highlights, it’s hard not to wince at the fan-service cliches. What Abrams/Lucasfilm did tonight wasn’t that. He might have a lot to live up to, but he also doesn’t need to win anyone over; his movie will make the GDP of a small nation regardless. So no, this wasn’t “for the fans”—it was just for fun. The way it’s supposed to be.

Here’s a transcript of the segment and the actual video (and in case the video doesn’t start at the correct point, just flip ahead to the 6:28 mark).

Abrams: There’s another significant star of this series…it’s the music the music.
[crowd cheers and applauds]
Abrams: Who likes the music to the Star Wars Movies?
[louder cheers and applause]
Abrams: So, wouldn’t it be cool if we did something insane right now?
Crowd [shouting]: Yes!
Abrams: Who wants to go see a live Star Wars concert right now?
[crowd goes insane while Abrams makes a show of counting hands]
Abrams: Okay, now, we only have room for all of you so here’s the thing, we’re gonna do something that is truly crazy, and the city of San Diego somehow said okay to this, we are literally all going to walk to a location together and we are going to experience a Star Wars concert tonight.
[crowd continues to scream and cheer]

Does this mean orchestras should double down on pops programming? No; instead, it simply confirms the value of orchestral music as an enduring art form alongside the unparrelled impact of the live concert experience.

1 thought on “Listen To Star Wars: The Force Awakens Director JJ Abrams Talk About The Importance Of Orchestral Music”