Today marks the inaugural post for the first new blog at Inside The Arts since 2011: Who’s Your Audience?; Doug Rosenthal on the art and industry of classical music. 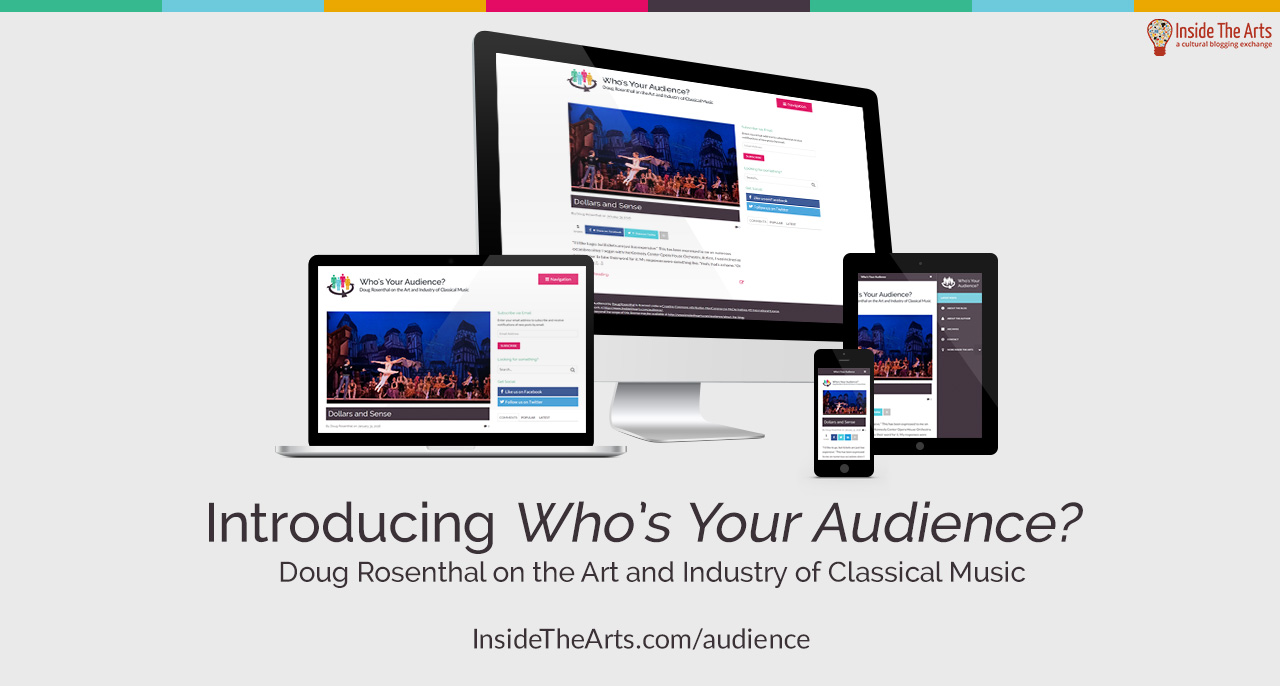 The author is Washington DC based trombonist Doug Rosenthal, who serves as the Assistant Principal Trombonist of the Kennedy Center Opera House Orchestra/Washington National Opera Orchestra (fit that on a bumper sticker, I dare you!). Although Inside The Arts currently features a number of outlets written by active musicians, Rosenthal adds a distinct voice to the mix as not only the first Millennial author in the group, but he also serves in a number of leadership and governance roles inside the American Federation of Musicians (AFM).

He is currently the delegate from his orchestra to the International Conference of Symphony and Opera Musicians (ICSOM) and he serves as an Executive Board Member of the DC Federation of Musicians, Local 161-710, both of which are elected positions.

Having said all of that, don’t expect the blog to focus exclusively on union or musician issues; in fact, I have no idea if Rosenthal plans to write about union issues at all. What I do know is he gravitates toward advocacy for the art form as a whole along with making it very clear that his opinions are his alone and he is not speaking on behalf of any AFM institution nor his employer via his writing.

The opinions I convey in this blog are solely mine. They are in no way representative of my colleagues in the Kennedy Center Opera House Orchestra/Washington National Opera Orchestra, the DC Federation of Musicians, the International Conference of Symphony and Opera Musicians, or anywhere else.

When it comes to advocacy, I’ve always found Rosenthal to possess a singular level of natural ability and gravitas.

Instantaneously charming, his personality rises above typical descriptions such as passionate and enthusiastic. Consequently, he’s an ideal voice to provide an outlet that not only allows him to speak his mind, but share what he describes as delighting in the pursuit of deeper understanding.

New musical discoveries. Deeper understandings of the classical music industry. The quest for excellence as a performer. I delight in the pursuit of all these endeavors, and I want to share my experiences with you.

As an extrovert, I also take tremendous joy in interacting with others. I hope my writing inspires you to express your thoughts, your reactions, or even ask questions.

You can get started via Rosenthal’s inaugural post, Dollar and Sense. And while you’re there, don’t forget to sign up for the email subscription and share via your social media networks.

About Inside The Arts

InsideTheArts.com was founded as a gateway to a behind-the-scenes look into the world of performing arts and it has been an ongoing pleasure to provide these platforms for some of the most insightful and diverse group of professionals who make their living immersed in the world of performing arts. Over the years, each outlet has risen in popularity and influence with several developing a large and dedicated readership. Who’s Your Audience? is the tenth outlet to be added to the collective since it was launched in 2007.