2017 is rightly being perceived as a watershed year for women’s issues throughout our society and in many parts of the world. One important aspect of this is the role of women composers in our culture.

Just as Hollywood has slowly realized that the number of talented women who can write, direct, shoot, and edit films has far outpaced the number of women being hired to take on those roles, the same is true in concert halls and jazz clubs and scoring stages and textbooks across the country.

One common response to the criticism that conductors and performers don’t program enough music by women composers is basically “we don’t know who they are or where to find them”. In order to address this knowledge gap, my team and I have endeavored to create a Women Composers Database that is both searchable and browsable along several different data points for over 3000 composers.

While this project has been in the works for some time, the data fields have been completely filled out and the database is ready to be used by the public.

I must emphasize that the database will never be “complete” since there are so many past, current, and future composers that are not on the list. Additional names will be included as they  are discovered or submitted and current composers will be updated as they write for new genres.

This project had its genesis in March of 2012. I wrote a column for New Music USA’s NewMusicBox listing 202 female composers with hyperlinks to their websites with the idea that such a list could assist conductors and performers in discovering women composer and ultimately programming their works.

After the column was posted, I was pleasantly surprised at how many additional names were added by others in the comments section and gave myself a future assignment to collate all of those new names.

In the summer of 2016, I came back to that assignment and put all 600+ names into a spreadsheet but I was unclear what my next steps should be. It seemed that a simple list of names (of which there were a number of established sites already in existence) might be useful to peruse, but such a list seemed less helpful to anyone actively searching for works in a specific genre or composers from a particular group.

Ultimately I came up with the current structure and set about filling in the information for the names on the list and began to add more names as I discovered them.

For the first year of this project, I added names as I found them and was lucky enough to have composer Jane Frasier offer to help me to research and fill in the data for each composer in the database. An important component to the building process of the database is a Google Form that allows others to submit information; this crowd-sourcing link is found at the top of the database itself and has had over 800 submissions.

Finally, the project got a huge boost in September from several of my students at the State University of New York at Fredonia. Five of them – Emily Sullivan, Sierra Wojczack, Samantha Giacoia, Immanuel Mellis, and Sean Penzo – took on this project for credit and dove into data research and input for the list that had grown to over 2800 names.

The database is delineated into five categories:

The Names column is listed alphabetically by surname (with Chinese names being listed in their traditional order) and each name is hyperlinked to a personal website or site that would allow discovery of their works. 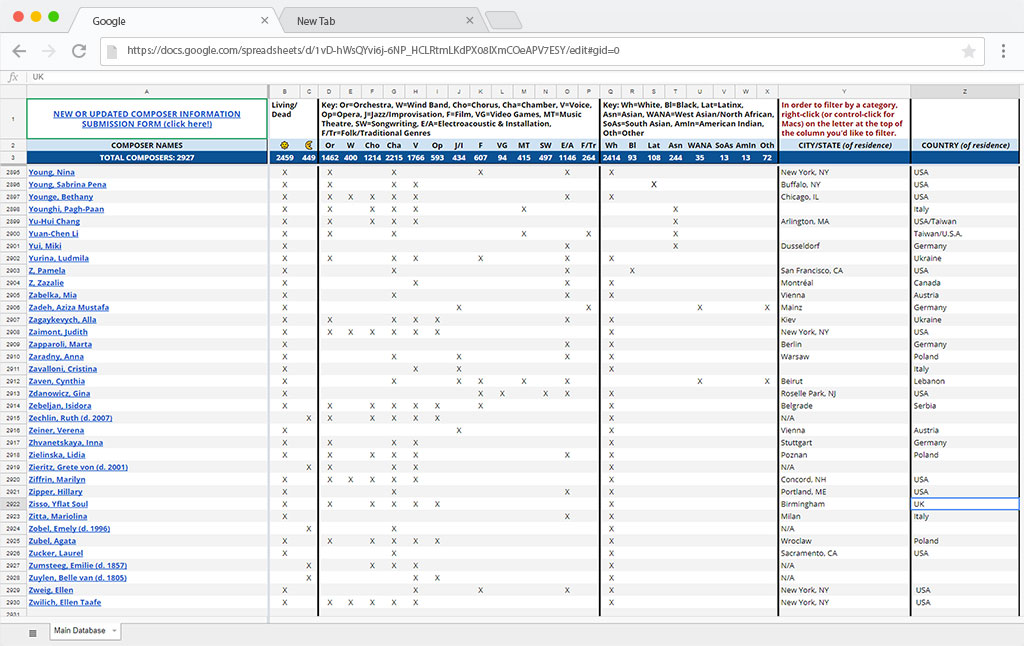 The Living/Dead columns were created specifically for those who are looking to program living composers, and composers who have passed away have their death years listed by their names.

I’m the first to say that these are pretty vague and one could easily come up with 15-20 more subcategories (I do plan on adding a column for composers who write for beginning and young musicians soon), but this initial list of genres should allow for most searches to get started.

By including a category of Race/Ethnicity, this database is intended to be a first step in improving programming of works by composers of color. The columns correspond to the following subcategories: White, Black, Latin, Asian, West Asian/North African, South Asian, American Indian, and Other.

Finally, the category of Location started out as simply listing the city and state (or city and country for non-American composers) in a single column, but we realized recently that programmers would be interested in isolating composers by their country, so we’ve divided the Location column into two, allowing for searches by country and by city.

In the database’s current configuration as a shared Google spreadsheet, a user is able to sort each column alphabetically. For those columns with names or countries, this will allow for easy searching and browsing. For those columns with “X’s” marking inclusion within a genre or group, an “A-Z” sort will pull all of the composers that fall under that subcategory up to the top of the database.

For example, I can sort the South Asian column by “A-Z”; all 13 names that are currently in the database are brought to the top, listed in alphabetical order, and it’s an easy next step to find the seven composers within that group that have written music for orchestra or the eight composers who have written for choral forces.

Once a list of composers has been collected, it is up to the browser/searcher to take the next step and dig into each website to find the works that each composer has written. I would love to have been able to create something as granular as David Daniel’s Orchestral Music that would give details on each work that a composer has written within a genre, but it’s taken this long just to complete the data gathering for the 3000 composers already in the database, so that endeavor will have to wait.

My future plans for the Women Composers Database include the continuation of expanding its population and a potential transformation from the current shared spreadsheet to a more stable and intuitive website. There are advantages to the spreadsheet format — I like the browsable nature myself — but a more robust website that allows for several different searches at once would also be an improvement.

Increasing the number of programmed works by women composers will take concerted efforts by everyone within the concept music community, and hopefully this database will allow for those efforts to be made more easily. 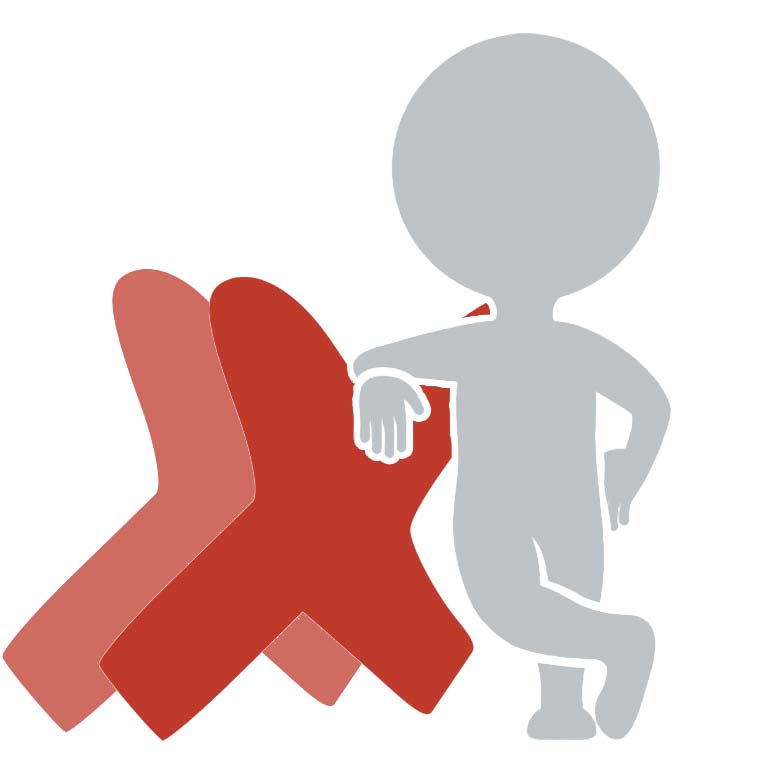 In Boston, XX Marks Anything But A Spot On The Program

5.3K5 min
#TBT How To Succeed At Artistic Planning Without Really Trying 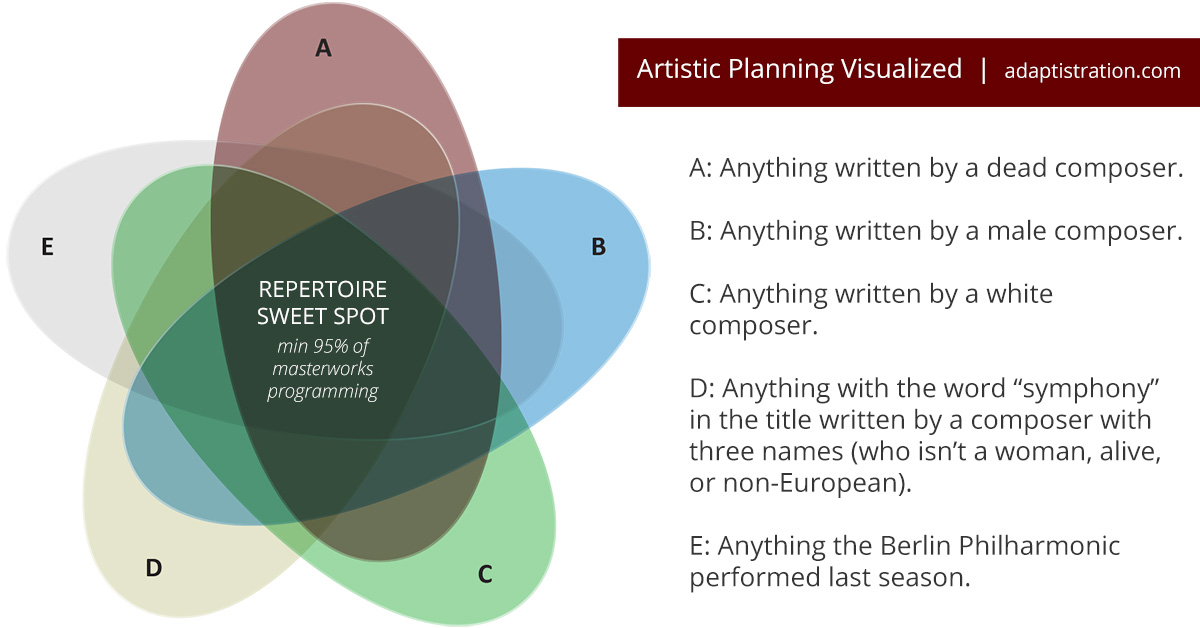