Skip to content
It just isn’t Take A Friend To The Orchestra week without a patron contribution and this year we have two. First up is from multi-Emmy award winning producer, composer, and director Scott Silberstein; a man who knows more than a few things about presentation and having a good time. In fact, if your orchestra is interested in video production, he’s a good person to know (so…hintidy, hint, hint). But for TAFTO, Scott draws on his skills to come up with an offer you just can’t refuse. ~ Drew McManus 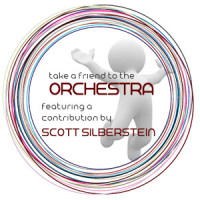 Okay, my friends, let’s talk about what we’re going to do tonight. Maybe a trip to Orchestra Hall to hear the Chicago Symphony?

Why, you ask, should you allow me to take you with me to the orchestra? Well, I can tell you why I go.

I don’t know any better.

The extraordinary sound of the symphony orchestra got to me before people had a chance to tell me that I wasn’t supposed to like music that, in their estimation, was old hat, even for people who wore old hats.

Orchestral music kept me company when I was a kid. It befriended me when I listened to albums my parents gave me, like “Tubby The Tuba” and “Fantasia.” We’d sneak time together when I’d raid my dad’s record collection, and we’d hang out regularly when I watched “Star Wars” (that soundtrack!), or listened to old records of Orson Welles’ “War of the Worlds,” or imagined being The Lone Ranger.

By the time kids at school tried to give me the memo that orchestral music was for elitist snobs, it was too late. I was already playing baseball, listening to the Jackson Five, playing with bugs and reading Encyclopedia Brown books, effectively doing all that boy-next-door stuff that disqualifies a kid from being elitist snob.

By then I’d figured it out: orchestral music was cool.

If it could paint audio pictures of the war of 1812 and cowboys riding across the plain, and if it could inspire Walt Disney to paint pictures of dinosaurs and mountain demons, and if Steven Spielberg and George Lucas used it in movies about sharks and space ships, how could it be anything but cool?

(And as for that elitist snob thing, let’s not kid ourselves; you’re going to find those everywhere. Ever sat next to a die-hard Roger Waters fan during a performance of the “The Wall?” Me neither, and I don’t want to. )

And, come on, admit it. You already like this stuff.

Maybe you laughed out loud when you heard it during Bugs Bunny cartoons, or thrilled to the frightening rush it added to The Beatles’ “A Day In The Life,” or cried when you heard it as your best friend walked down the aisle to get married. It’s been in your life since you were born. It’s in your DNA.

And, to use an expression we didn’t have until just under sixty years ago but was just as applicable a couple of hundred years before that, this stuff rocks. I know you love your “Bone Crunching Metal Mix” on your iPod, but a power chord’s a power chord no matter who plays it, and “In The Hall Of The Mountain King” rivals any Slipknot show for the most sternum-rattling 4-5-1 progression (which is probably why The Who covered it).

I can see in your eyes… you’re almost sold. (But not quite.)

You’re worried that I’m trying to take you to one of those “good for you” experiences, where if you eat your spinach and swallow your Beethoven, then maybe afterward you’ll be allowed to go out and play.

But isn’t all music good for you? Or at least, aren’t all genres? I don’t try to convince people that Debussy (or The Beatles, or Kurt Elling, or Kander & Ebb, etc. etc.) isn’t spinach because I reject the whole spinach premise in the first place. All of it – the rock, the jazz, the classical, the hip-hop, the Broadway, the whatever – it’s all just music, the best of which is timeless, and even the worst of which can be exciting when it’s being played right in front of your eyes. So let’s let those spinach metaphors go (or at least come up with some tasty new spinach recipes).

You already knew this before we started talking.

Some part of you already knew that the magical, mysterious, breathtaking sounds made by symphonies every night in every corner of the globe rival the thunder of a Springsteen concert, the effervescence of a Sondheim musical and the humanism of a U2 show. I really didn’t have to tell you that the majestic intimacy of symphonic performance is as rousing as a home run, as inspiring as a great speech, and as joyful as a parade. You’ve already been there. You’ve already heard it. You’ve already felt it. You just haven’t experienced it live and in concert.

So here’s the deal.

First, please believe me when I tell you that I don’t go to the symphony because I want to hobnob with business tycoons, or because I’m stuck in the eighteenth century, or because I think so much smarter and cultured than you or anyone else.

Second, understand that I go, and that I want to take you with me, because – and forgive me if I get a little technical here – it’s effing amazing.

So. What do you want to do tonight?

X
TAFTO 2013 Contribution: Holly MulcahyTAFTOSix Fail-Safe Ways to Get Your Concert On By: Holly Mulcahy; violinist and author of Neo Classical, a blog about the future of classical music. During…

1784 min
X
TAFTO 2013 Contribution: Ceci DadismanTAFTOTrying to get someone to go to the opera can be a challenging thing. As the chief marketing gal at Palm Beach Opera, it quite literally is my job to g…