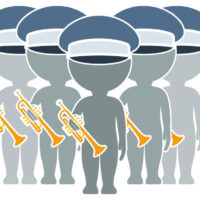 It is heartening to see the US Armed Forces actively push back against the proposed amendment from Rep. Martha McSally (R-AZ), and co-sponsors Rep. Steve Pearce (R-NM) and Rep. Betty McCollum (D-MN), to gut military music programs by cutting their funding. In addition to a host of public statements from military and civilian leaders inside every branch of service and the Department of Defense, the United States Air Force (USAF) went an additional step and used their own broadcast journalists to produce a 10 min documentary video about their music programs.

It’s especially poignant to see this coming from the USAF seeing that the amendment’s sponsor, Rep. McSally, is a retired USAF Colonel and made waves for publicly denigrating military bands and belittling their soldier musicians because she finds their contribution to the armed services as having no value to defense.

It’s especially nice to see the video begin by touching on the band’s contributions to cultural diplomacy with the narrator describing the program as “smart…delicate…and diplomacy at its finest.”

There’s a valuable connection here to the orchestra field, especially those interested in the value of outreach and relevancy.

[USAF bands] performances in the US are the direct response to the outreach and engagement plan from the Secretary of Defense, who wants to connect our military to the American public. Most people don’t live near a military base, so the bands travel to the people, giving more opportunity to interact with airmen…but their role gets really interesting when military leaders use them to connect with the public.”

Pop into the video at the 2:27 mark for a segment that examines a specific situation where the USAF used their band program to develop community connections that were otherwise stalled through traditional methods.

If you have not yet contacted your local representatives to insist they stop Rep. McSally’s amendment, this video should provide ample inspiration.

You need to contact both of your Senators and ask about ongoing efforts for any short term funding.

If congress returns to the prescribed process, you need to contact your representatives to make sure the discrepancy between the two original versions of the bill will end up in a conference committee, where Senators and Representatives meet to resolve disagreements on a particular bill. This is the stage where you need to keep up pressure on your Senators and your Representative to leave out Section 10010 and to continue to allow the DOD to fund military musical unit performances.

“It’s Smart, It’s Delicate, And It’s Diplomacy At Its Finest”

932 min
X
#FirstSevenJobs: Arts And Culture EditionCurrent EventsThe Hashtag #FirstSevenJobs is beginning to make some viral momentum at Facebook and as fun as those can be, let's take it one additional step and go …