There’s a study in PR crisis management unfolding in real-time via the Oregon Bach Festival’s (OBF) decision to terminate artistic director, Matthew Halls. If you haven’t been following the details, here’s what you need to know: 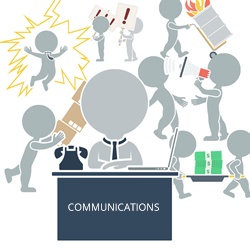 If that seems odd, good; your instincts are right where they should be.

Let that sink in. This is not the sort of assertion made lightly. Doing so without solid, irrefutable evidence is the sort of place angels fear to tread.

Since then, the story has been snowballing. All the usual culture news outlets have been weighing-in and/or aggregating reports.

UPDATE: The Register-Guard published an editorial on Sep 12, 2017 that calls on UO and OBF to provide a more detailed explanation for Halls’ dismissal if in fact, the Mobley incident was inconsequential.

Whether any continued public examination continues will depend on how Halls decides to proceed.

Given Mobley’s published statements and the UO’s subsequent repudiation, it’s difficult to ignore the highly irregular decision to end a three-year contract extension merely two months after inking the deal. At this point in the process, the OBF/UO is one investigative report away from being tagged with “beleaguered” status.

If nothing else, the situation has been a fascinating study on crisis management and even if that were the only reason to continue paying attention (not by a long shot), it would be more than enough.