I’ll be the first to admit my good fortune when it comes to having and insider’s view into some of my wife’s projects. One of the latest is a brand-new violin concerto written for her by award winning film composer, George S. Clinton.

The concerto is unlike anything I’ve encountered; while it’s a formal violin concerto, it’s purposefully written in the style of an epic western film score. Consequently, George and Holly were both keen on developing a companion website capable of embodying that style.

The project really is a movie of the mind and from start to finish, it was wall to wall fun. It isn’t often that we get the opportunity to create a visual brand for a traditional classical music work steeped in contemporary film design, so the challenge was finding a way to make the final product feel like an intuitive combination of those two environments.

Speaking of applying a film-centric approach to the project, one of the coolest features George and Holly came up with was a 3-min teaser that combines all the key musical elements from the concerto. It isn’t simply a 3-min clip, rather, George adopted the same approach as when he writes movie teasers to come up with this unique version.

They’ve used it twice to great effect, once with the Chattanooga Symphony where the work will be premiered (George is from Chattanooga and Holly serves as concertmaster) and once with the Wichita Symphony, where the work will be performed in the 2019/20 season. In both cases, they inserted it into the performance without including it in the program, so it was a surprise for the audience.

I can’t think of a better way to offer up an orchestral version of a film trailer.

The other genuinely fascinating aspect of the work is the story George wrote to help frame the music. Here’s how he framed that concept:

The Rose of Sonora is first and foremost a violin concerto. One of the most significant aspects of it to both Holly and me is that it be accessible to and engaging for today’s audience.

It is composed in five scenes (movements) for solo violin, symphony orchestra, and male chorus, but in the style of an epic Western film score. One of the features of the solo violin part is the merging of traditional fiddle technique with classic violin technique, giving the main character, Rose, her voice.

As a film composer I am used to composing to a story. After researching the lives of outlaw women of the old west, I decided to create my own story and heroine, The Rose of Sonora.

Each of the five scenes tells part of her story.

I believe that for most of us, listening to music creates images in our minds. I decided to use that as a way of presenting the concerto. Rather than a passive listening experience, it will be an interactive one.

We took George’s story to create one of the highest impact pages on the site.

In addition to the teaser, you will find traditional clips from each of the five scenes. One of the project’s real joy-points was creating the graphics to accompany each clip. 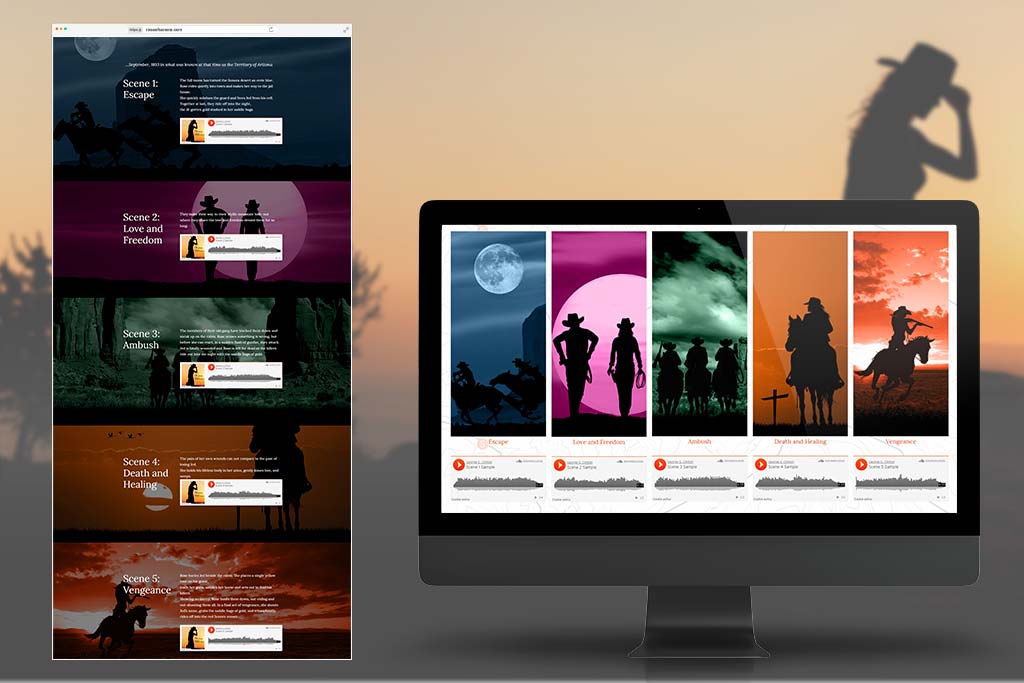 Speaking of the recordings, George and Holly decided to apply a little more film industry expertise and use Capitol Studios to record the solo violin over a Hollywood quality virtual orchestra. They brought a photographer in to document those sessions and came out with some great photos.

From a user experience perspective, the content flow is separated into two primary user types: those interested in booking the concerto (deciders) and users looking to engage with the content (listeners).

On the decider end of things, I’ve consumed a few decade’s worth of gripes and attempted to right those wrongs by providing more content than one finds on the typical artist/concerto website. If you’re someone that falls into that decider persona, I’d be curious to know if the material covers most of what you find missing. Add to that, Holly decided to leverage her existing marketing prowess and come up with a comprehensive comms toolkit.

If you want to catch the world premiere on April 25, 2019 in Chattanooga, you can visit the orchestra’s ticketing page.