Among all the problems Interlochen administrators have articulated that pose a large threat to the institution’s future is an impending financial crisis.

At the beginning of the 2004 summer season, Interlochen Center for the Arts president, Jeff Kimpton, told a collection of faculty and staff members that he believed the ratio of staff to faculty was unsustainable and as a result one third of them would not be returning the following summer.

In a February 3, 2005  article of the Evanston Review by classical music critic, Dorothy Andries, she quotes David Rhind, president of the ICA alumni board, as saying,

“We did some projections and if the institution stayed on its
current course, within four or five years it would have a
million-dollar operating deficit and would spiral out of existence very
quickly. Clearly, the old model was not sustainable.”

In order to eliminate the possibility for a financial problem of that magnitude, the administration decided to reduce expenditures by eliminating faculty and many long time support staff positions and to reduce the length of the camp season from eight weeks to six.

On the other side of the financial coin, measures were introduced to increase revenues.  One of the most significant revenue enhancing
programs was a tuition increase for the 2005 summer Arts Camp session.

Chart A shows that difference in the overall cost for an average music student between the 2004 and 2005 seasons is, at $8.00, negligible: 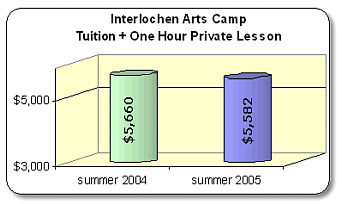 That doesn’t appear to be much of a revenue enhancer until you take into account the length of camp was reduced by 25%, from eight to six weeks.  Once that adjustment is made the cost per week from 2004 to 2005 actually skyrockets by 31%.  Chart B illustrates that increase: 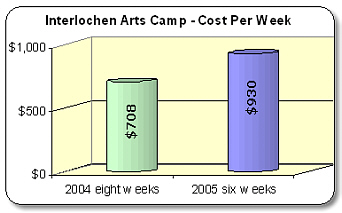 Nobody likes to pay more for something, but rising costs are a fact of life.  However, one of the other reasons provided for the basis behind many of the changes at Interlochen is the steadily increasing amount of competition from other summer music camp programs.

In a telephone interview with ICA Director of Music, Michael Albaugh, he stated that some of Interlochen’s primary competitors were music camps in Aspen and Tanglewood.  He went on to say that as part of their research to create a long term strategic plan he and other administrators studied these camps to gain some insight on how Interlochen could change.

That approach is certainly a staple of research and development activities in many for profit companies and is good practice for nonprofit organizations that operate in a competitive educational market as well.  Unfortunately, with the recent 31% price hike Interlochen is pricing itself well beyond their competitors, charging 15.86% more per week than Tanglewood and 31.95% more per week than Aspen.  Chart C illustrates these differences: 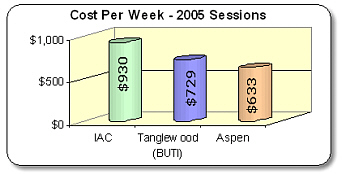 So, in order to maximize revenues and improve their long term financial situation, the current administrators at Interlochen have decided to reduce the number of music faculty and raise tuition.

As a result, Interlochen’s previous teacher to student ratio of 2:1, a figure most educational institutions aspire toward, will now increase.  Furthermore, if Interlochen had maintained the same cost per week figure from 2004 they would have retained a competitive pricing structure compared to their peer competitors.  Even with a standard 3%inflationary increase over last summer’s session they would have resulted in a cost per week of $728.72; which would have been 3% less
than Tanglewood and $95.72 more than Aspen.

In the end, the decisions researched and implemented by Interlochen’s executive administrators have produced a product with a
lower teacher to student ratio and a higher cost to potential users. It’s as though the Ford Motor company decided that in order to become more competitive in the $20,000 family sedan market they would study Toyota and Honda.  How successful do you think they would be if their final product wasn’t as good as the sedan they used to produce while simultaneously costing 31% more than their competitors?

Would you want to buy a sedan that didn’t work as well as previous models and cost $3,000-$6,000 more than its primary competitors?