Part 1 in this series examining the new Schermerhorn Symphony Center in Nashville, TN focused attention on the music library facilities. This installment will continue by examining the SSC’s recording facilities…

Did I Turn The Mic On?

Nestled immediately to the west of the stage, the recording control room is a heartbeat away from the action, as the diagram to your left illustrates (click to enlarge). If you’ve never met a recording engineer I highly recommend you take the time to do so. It’s one thing to record electronic instruments where variables of sound input can be controlled uniformly at the source but when it comes to orchestral music, all bets are off.

To complicate matters even more, they have to divine ways of setting up microphones and find space for a seemingly endless amount of cable without obscuring sight-lines for patrons or getting in the way of the musicians. On average, I really like recording engineers, they tend to know much more about classical music than most insiders give them credit for and they drink a lot of coffee. I can’t stress that enough, a lot of it.

I spent some time talking with two of the lead engineers responsible for supervising the SSC’s recording facilities. John Hill is a freelance engineer producer and Nashville Symphony archive recording engineer. Blanton Alspaugh is a producer and engineer for Sound Mirror, a Boston based company. Blanton, who is also a conductor, was on hand to assist with setting up the audio for the gala events and to begin addressing issues related to a long term broadcasting project the symphony will begin implementing this year.

According to John, the engineers didn’t become involved in the design stage of the building until construction was nearly complete.

“We started to have input about four months before the hall was scheduled to open,” said John. “And since we’re working from the ground up, everything is new and every time we open a new mic there’s something waiting for us, but so far it’s all working out great. In fact, you’ll notice that our control room was originally intended to be a [guest artist] dressing room. We even have the lighted mirror and our own private bathroom, not that we’re complaining about that, we actually like having it here.”

You can see the mirror and bathroom door John was referring to in the background behind Blanton in the picture to your right (click to enlarge). You can also see some of the improvised sound absorption solutions they’ve come up with until something more permanent is designed. Even though the engineers didn’t get into the building until the summer, they have quickly adapted to the new acoustic space.

“I’ve been listening for two weeks and every day there’s a move or two for microphones based on what we’re hearing in the control room,” said Blanton. “As the orchestra gets more familiar with the room and as we get more familiar it we will continue to move things around until we find ideal locations for all the mics.”

Among the projects the engineers have been working on is improving their ability to control microphone placement remotely.

“At present, our plan is to be able to have increased remote access but going from zero to full speed with a complete installation of a system like that is going to take more time than was available up to the point of the gala concerts,” said Blanton. “Eventually, it will be something that we can control remotely. Another feature along those lines is the ability to make placement resettable, which is a system that has a memory function that stores information such as cable lengths for mics suspended from the ceiling. Therefore, if one show to another requires an equipment move, we can simply go back and select the appropriate reset setting.”

John agreed that the system will make things much easier for everyone since the automation will alleviate the need for a bunch of us engineers pulling threads and tying knots, a system they currently employ to set up equipment. The picture to your right illustrates how they manage to run cable around the building using a simple, but effective, aluminum cable way.

However, getting a highly complex automated system up and running will take time. According to John, it will likely take another six months. Blanton added a point that the SSC management has been behind the idea since day one.

“It’s getting there but that sort of system is made up of servoreelers and other equipment that has to be practically hand made so pieces are showing up a few at a time,” said Blanton. “This sort of system is a big labor saver and when we talked to Alan Valentine about it he was completely behind it and told us to make it happen so that’s exactly what we’re doing.”

Of course, with all of this new hi-tech sound recording equipment in place, I had to ask the engineers what the orchestra plans to do with all of it.

“The symphony has been making archive recordings for some time,” said John. “I’ve been supervising those recordings for the past five or six years and we’ll continue that in this facility. Along with that, our new documentary series will come online soon and we’re going to start using a much higher resolution audio format for that than before. We’ll also have the ability to record on a multi-track format instead of a simple stereo mix.”

Blanton quickly pointed out that the ability to make archive recordings on a multi-track format will give the organization much more flexibility when it comes to using their recordings. It will also begin to place them on equal footing with regard to recording capabilities with orchestras such as the New York Philharmonic and the Boston Symphony.

“One of the big reasons to make that upgrade is because the orchestra will be able to do much, much more with those recordings with regard to online media, downloads, CD’s, etc.,” said Blanton. “This new format will allow [the Nashville Symphony] to take the same recording and remix it to the appropriate media as the need arises.”

I spent some time in the control room listening to a recording performance of Barber’s Essay No. 2 and the sound produced by the speakers was just fantastic as was the balance from the mics on stage. It was so good I almost didn’t want to go back out to the hall to hear it live. You can see some of the equipment they use for recording and the speaker system they currently have in place in the picture to your right. As time moves forward and after all of the equipment they plan to use arrives, the engineers said they will have everything installed in rack mounted systems.

I invite you to return tomorrow for Part 3 in this series where we’ll continue our tour through the Schermerhorn Symphony Center administration offices, education facilities and one of the more unique components, a fully equipped commercial kitchen. 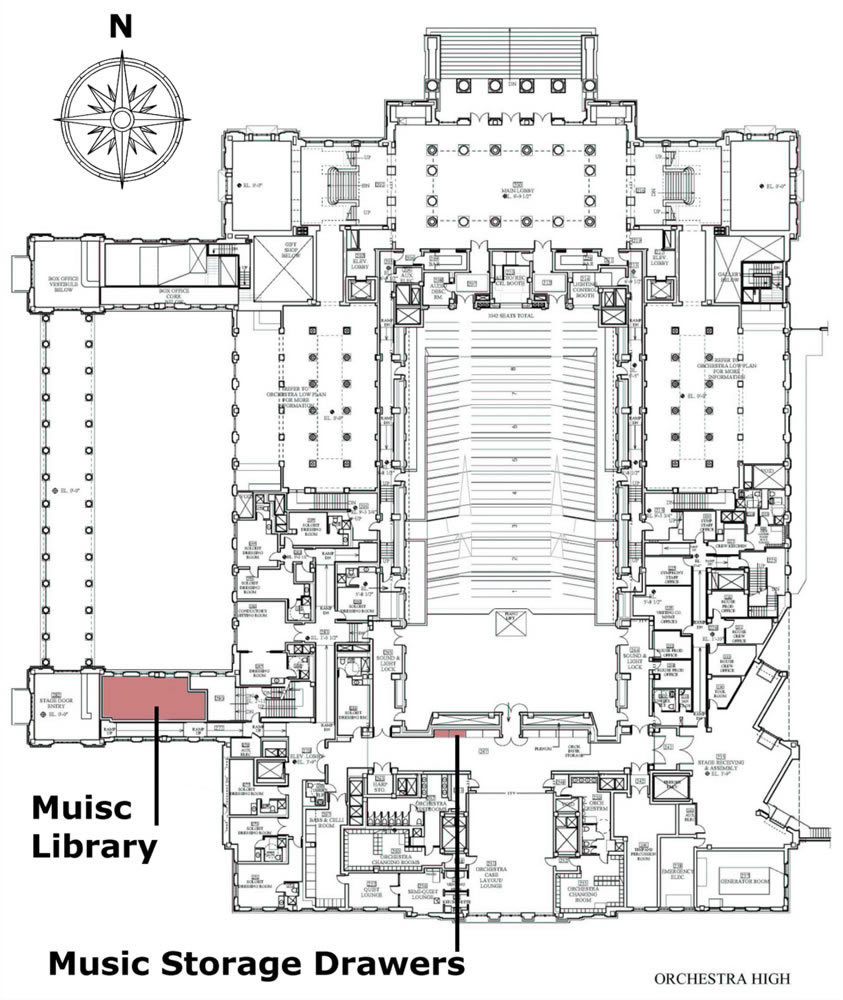 All About The Schermerhorn Symphony Center Part 1

All About The Schermerhorn Symphony Center Part 2

235 min
All About The Schermerhorn Symphony Center Part 3