A white snowscape races toward camera … the MAIN TITLE quickly recedes, followed by a roll-up. Episode V: THE EMPIRE STRIKES BACK…

Although certainly not science fiction, the recent opinion piece co-authored by Minnesota Orchestra Association (MOA) board chair Jon Campbell and MOA negotiation chair Richard K. Davis and published in the 11/28/12 edition of the Minneapolis Star Tribune still managed to contain what some might consider a rather cinematic tone. 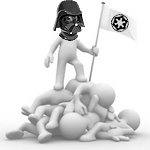 There were bad guys, victims, and loads of anguish all set in a cold and snowy land but the part to pay close attention to is the final three paragraphs.

The musicians’ negotiating team appears to be avoiding at all costs our request to come back to the table with a substantive counterproposal. While we have been clear that we seek savings of $5 million annually, the approach we use to reduce these costs can be adjusted through the course of good-faith negotiations. But we need our musicians to participate for this to happen.

Instead, they choose to embark on attention-diverting tactics and inflammatory accusations against the very people who give time, talent and money to support the musicians. We are perplexed by this standoff. What purpose can it possibly serve?

Our hope is that some of the energy that musicians are putting into these activities will be diverted to helping the Minnesota Orchestra find a solution to a serious financial problem and to giving our audiences the season of music they deserve.

Once again, members of the MOA executive committee have focused on the talking point of the musician’s lack of a formal counterproposal. We covered this item in the last half of yesterday’s post by describing that formal proposals and counterproposals aren’t a prerequisite for collective bargaining best practices. Instead, it is common for stakeholders to work through one point at a time, take notes while they go, and codify the resulting changes.

This peek behind the curtain was provided with the sincere hope that it would provide a window of opportunity for all MOA stakeholders to save face and get back to genuine bargaining.

Conversely, Campbell and Davis went in the opposite direction and decided to turn up the rhetoric with their Death Star Tribune article.

Clouded is your fate.

The mighty doors to the dining room slide open and the group enters the elegant room. At the far end of a huge banquet table sits, Darth Vader Impasse.

On the surface, the MOA executive committee’s public angst over the lack of a musician offer may seem like a perfectly straightforward and reasonable point. If both parties were bargaining in good faith and beyond reproach, that would likely be an accurate assessment.

But as we learned in yesterday’s post, a formal counterpropsal isn’t a firm requirement to make genuine negotiation headway. Consequently, the distress over the presence of a counterproposal may appear to some as puzzling and the latest Campbell and Davis article pushes it firmly into the lady doth protest too much, methinks territory.

Here’s the reason why: once the musicians submit a formal proposal, the MOA executive committee acquires a very clear prerequisite for declaring an impasse.

Impasse is when two parties engaged in negotiations reach a point where further discussion would be futile. If impasse is reached, then the employer is in a position to lawfully implement the most recent pre-impasse proposal.

And in light of just how astonishing the MOA’s pre-impasse proposal actually is (details), having that on deck and unaltered throughout the course of bargaining provides an ultimate power in the universe eschelon of leverage.

Once impasse is declared and the pre-impasse proposal imposed, the employees are placed in a position to accept the terms or refuse to work, thereby altering the existing work stoppage from a lockout to a strike.

And once the employees are on strike, it all but guarantees a loss of unemployment benefits and an acute acceleration of the economic distress leverage traditionally favored by employers in an orchestral labor dispute.

What’s important to consider at this point is the overarching strategy of imposing a contract after impasse is not something an employer can implement late in the game. Given that the fact-laden legal determination of an impasse is so clearly defined, successful implementation requires employers to plan ahead and be very mindful of language used in written communication and public statements.

[quote style=”boxed” float=”right”]There is no escape. You will use the dark side of The Force…or perish.[/quote]It is time for Campbell and Davis to drop the charade of feigning bewilderment over the absence of a formal counterproposal and accusing employee stakeholders of playing games and delaying progress while all along engaging in their own, almost certain, duplicity.

In the end, everyone loses when playing this game.

Embrace the dark side of collective bargaining.

13 thoughts on “The Empire Strikes Back”