On 1/15/2013, ABC7 News in Chicago broadcast a segment by Frank Mathie about a new exhibit of the 100 year old miniature Chicago Symphony Orchestra (CSO), created by famous miniaturist Frances Glessner Lee as her first large scale project. Lee’s parents were plankowner angel donors to the CSO in its early years and the 75 member mini-CSO was a gift for Lee’s mother in 1913. 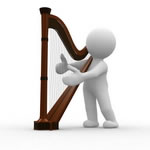 Of particular interest is the amount of detail Lee put into each figure. According to CSO archivist extraordinaire, Frank Villella, Lee used to attend rehearsals to sketch each individual musician and she wasn’t shy about getting up close and personal.

“She would sit in the house and sketch the orchestra while they were rehearsing. But then also during the breaks she would go up to the individual musicians and usually taking one of the doll’s heads, she would sketch the facial hair… the hair on the top of the head,” said Villella.

Although it should come as no surprise that the mini-CSO is comprised of men, Villella (who shows up at the 1:07 mark in the video below) also makes sure to point out that the ratio for the current CSO is about 65 percent men and 35 percent women (Villella refines that figure in a CSO archives blog post that the precise ratio is 60.2 percent men and 39.8 percent women).

In addition to the ABC piece, Villella posted an article at his blog, from the archives, which provides additional mini-CSO gems. For example, the Glessners hosted the entire orchestra on January 17, 1913 for dinner and private viewing. There’s also a mini-CSO photo from 1913 and if you look closely, you’ll notice that a few musicians bucked the period trend and went with any facial hair 🙂

I contacted Villella for some additional information and he said that the mini-CSO originally had 90 members but some dolls have gone AWOL over the past century and that Lee was actually invited to attend the rehearsals to sketch members at music director Frederick Stock’s personal invitation. So it seems fair to assume that the orchestra was in on the birthday gift.

Lee presented the doll orchestra to her mother, Frances Glessner, on her birthday, January 1, 1913,” said Villella. On January 17, 1913 the Glessner family invited the entire orchestra for dinner and the first opportunity to view the dolls; last night’s event [in Chicago] commemorated the centennial of that event.

If miniatures are your thing and you’re in Chicago, this is a no-brainer of a must-see attraction and it will be available to the public through February 24, 2013 not to mention the fabulous Thorne Miniature Rooms exhibit at the Art Institute of Chicago (which is a permanent exhibit).

Update: Villella posted some info and a few pics from the Glessner family event at his blog this afternoon.

1 thought on “The Most Adorable Bunch Of Tiny White Guys. Ever.”