Usually, stories that begin with “well, we were drinking…” turn out to have something other than a happy ending but a recent article published by Holly Mulcahy on 2/11/2015 at Neo Classical proves to be an exception to the rule.

Mulcahy has been chronicling a series of events leading up to her upcoming performance of Jennifer Higdon’s 2010 Pulitzer-prize winning Violin Concerto on March 12, 2015 with the Chattanooga Symphony & Opera including bringing the piece to the Chattanooga School for the Liberal Arts where the students wrote stories, drew pictures, and shared their thoughts when listening to the concerto. 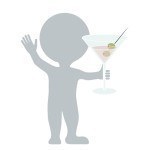 She promises a post about that in the near future but the article that went up yesterday describes her idea to bring the work to one of Chattanooga’s leading mixologists, Nathan Herron of Easy Bistro, to see about creating a cocktail that embodied the piece.

Although the effort could have fallen victim to a creative process perhaps best describes as the path of least resistance and produced yet one more populist spin on the cosmopolitan, what Herron did was genuinely enticing.

“The overall impression of the piece was a listener could be pushed to a boundary, but in a good way. I was stretched to the point of almost tipping over, but never completely. There were amazing textures and a freshness in the piece that was new and different, but familiar at the same time.”

From that perspective, he endeavored to identify ingredients to create his cocktail from the same perspective that he believed the composer used sound to create the concerto. Mulcahy characterizes it from the perspective of risk.

A cocktail like this is really a drinkable metaphor for how to approach the concerto. It’s new and with that comes the unknown, which can be scary or enticing. But you quickly find out that the varying ingredients work in a surprising way, much the same way the concerto works. In both cases, sharing the experience of trying something new with friends ultimately heightens the experience.

You can learn about the actual cocktail, called The Awakening, in the post along with more insight from both Mulcahy and Herron at the article. If you want to try the cocktail, it only exists at Easy Bistro and if you want to hear Mulcahy perform the concerto with the Chattanooga Symphony on March 12, 2015, you had better get a ticket soon.

Wouldn’t this be a fun idea for your group (hint: you should contact Mulcahy to find out how she went about it)?