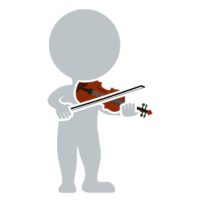 There’s a terrific article by Barry Courter in the 4/8/18 edition of the Chattanooga Times Free Press. Courter followed the musicians from Arts Capacity on their most recent program bringing live music to inmates at Georgia’s Walker State Prison.

The result is a wonderfully detailed account of the program along with direct feedback from inmates attending the program. I was planning on writing something about the program as the promised follow up to a post last month about Arts Capacity’s work.

I can say that Courter’s article provides a far better overview than any third-person perspective I could provide.

Holly Mulcahy stands with her violin, her back to the wall of the gym at Walker State Prison in Rock Spring, Georgia. Next to her is Mary Corbett with her violin. Between them and 128 inmates serving time for a host of crimes big and small are a microphone stand and about 5 feet of open gym floor.

A lone female officer sits off to the side. The men are seated in chairs fanned out in a semicircle facing the stage, quiet and staring at the two women, who are smiling and relaxed.

The place is so quiet, Corbett steps to the microphone and says with a laugh, “Talk amongst yourselves. We have to tune up.”

It’s a relatively simple moment, but it sets the tone for how the rest of the evening will go.

The author continues by including input from the performers, composers, Arts Capacity board members, but perhaps most importantly, from inmates attendeding the session.

“There are no wrong answers,” [Mulcahy] says at one point.

This is the key to the whole recital, she says later, and it’s the reason she believes the audiences have gotten larger each of the five times she has returned to perform at Walker State over the last three years. Twenty-five preapproved men attended the first. Now, anyone who wants to sign up to attend is allowed.

Mulcahy is there to perform, and to listen, not tell the men what to think.

“We get enough of that here,” says inmate Scott Reed before the performance.

His comment draws a quick chuckle from the three other prisoners approved to talk to the media, but it serves as a reminder of the realities of where we are.

Reed says he did not attend the early recitals, but he couldn’t help but be surprised at what he heard in the dormitories (the men live in bunk beds in large open rooms rather than cells) after the performances.

“I heard grown men talking about their feelings and their emotions that they felt hearing the music,” he says.

“These are pretty hard guys from the streets.”

Says inmate Garrett Anderson, “I’ve never heard this kind of music before. Never. And I never thought about how something made me feel. I never talked about it.”

Reed says it is not at all unusual now for the men to talk about the music for days and weeks following a performance. It’s those conversations that help explain the increase in audience participation, he says.

Inmate Gordon Kelly Briggs says he used to listen to classical music while driving a truck for a living.

Even though they’re a young 501(c)3, they’ve managed to forge genuine partnerships with other arts organizations. The Times Free Press article covers the portion of the program run by Christine Bespalec-Davis, from Chattanooga’s Hunter Museum of American Art.

The work Arts Capacity is doing is a worthy model for developing meaningful programs that focus on the long-term benefits of recipients, not the self-gratification of organizational stakeholders or being used as grant application fodder.

Over the next decade, shifting focus away from exposure stats and toward quantifying program benefits for recipients is going to be one of the defining traits of successful arts organizations. The sooner orchestras move in that direction, the better.

X
Classical Music Is Dying Because We Aren’t Dumbing It Down Enough…CommentaryOutreach was just as popular of a topic 100 years ago as it is today. Case in point, the October 1917 edition of The Etude magazine which published an…