Several years ago, I was part of Opera America’s Building Opera Audiences Grants panel and one of the recipients designed a program to “insert opera into popular media culture through an entertainment-based content marketing campaign, also known as product placement.” In short, they wanted to get opera into more television and film scenes (more details).

While I haven’t seen any formal results from those efforts, I did notice a recent episode (s02 e06) of Seth MacFarlane’s Sci-Fi series on Fox, The Orville, which integrated a 60-piece orchestra into a scene.

By integrate, I don’t mean they were simply background music.

MacFarlane, who directed the episode, incorporates an orchestra concert as an integral plot element that receives 1:11 of screen time.

Variety magazine recognized the increase in quality and quantity of live orchestra soundtracks for Sci-Fi television programs in what it defined as an “orchestral arms race.” While that’s decidedly a win-win, it’s still rare to see producers invest in the enormous costs to insert live musicians (not just actors playing instruments) into on-screen roles.

To that end, MacFarlane’s The Orville dominates its competition and the entire field of live classical music owes him thanks for expending his own political capital to make this a thing.

The scene, which begins at the 17:05 minute mark, even includes a speaking role for the conductor. The lines have nothing to do with the plot directly, but it’s clear MacFarlane wanted to make a point with the handful of lines:

One of the great pleasures of conducting the Union Symphony is getting to travel around the galaxy every summer, performing for so many brave members of the fleet.

It’s an honor to be here.

Before we begin our main program, we’d like to start off with something a little light.

You can watch the episode at fox.com (sorry, there’s no embeddable version as of now). 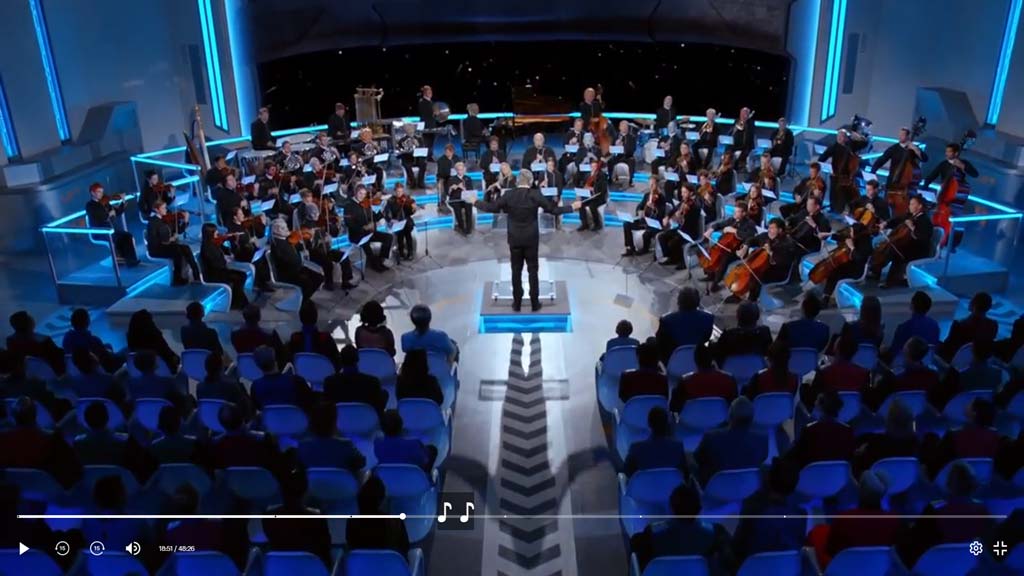 A few fun observations about this orchestra of the future:

Before the orchestra concert scene, one of the main character’s son has a piano recital and starting at 5:45, we get nearly a minute of Chopin’s Etude No. 3 in E Major, Op. 10, “Tristesse.”

Kudos to the young actor, Kai Wener, for doing a fine job at acting his way through the work.

In my previous professional life as a piano teacher, this was a favorite work to program for recitals. I laughed out loud at a genuine “art imitates life moment” when one of the CGI generated characters, voiced by Norm MacDonald, leans over to the young performer’s mother and says, “he’s really good, seriously, I thought this was gonna suck but he’s really good.”

I can say from firsthand experience there’s nothing quite like seeing that exact sentiment float across the face of parents during a piano recital. And yes, more than few parents say nearly the same thing, albeit with a bit more grace, out of earshot of the performers.