As is the case with every annual orchestra compensation report, the most important element to keep in mind is these figures encompass the 2016/17 season and not the current season. Although it isn’t unusual to expect that the most recent figures available would cover the previous season, that’s not how things work thanks to these reasons:

The result is the most recent season available is always two seasons behind. 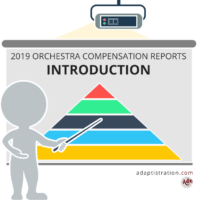 Where The Information Comes From

Adaptistration makes no claim to the accuracy of information from documents compiled or reported by external sources. If you have reason to believe any of the information is inaccurate or has changed since reported in any of the above sources and you can provide documentation to such effect, each respective article will have a form where you can submit that information.

The 2017 reports tried something new: each article was published with notes indicating any unreported figures and the respective organization was contacted for the missing information afterward.

The goal was to provide a more realistic sense of how often information is missing and confirm an organization’s commitment to the spirit of compensation transparency. It turned out to be an enormously effective approach so you expect more of the same this season.

Once each group can respond to requests for information and provide the missing figures, the respective articles will be updated accordingly.

X
Let’s Take All The Repeats For Berklee’s “Music Careers In Dollars and Cents”…Compensation ReportsEvery now and then I'm fortunate enough to have someone point out a resource I missed when it was originally released. The most recent example is Berk…

1232 min
X
2019 Orchestra Compensation Reports: ExecutivesCompensation ReportsWhen it comes to executive compensation, the 2016/17 season was still seeing averages skewed thanks to the ripple effect from a larger than normal num…
Send this to a friend