When it comes to executive compensation, the 2016/17 season was still seeing averages skewed thanks to the ripple effect from a larger than normal number of CEO vacancies and interim appointments among the higher paying positions. Nonetheless, even when including those lower than normal figures, the average executive compensation still managed to increase by 2.88 percent.

In order to provide information that is as accurate as possible, info from the 2016/17 season is gathered from the following sources:

Did you know? Direct links to most of the orchestra’s financial disclosure documents at guidestar.org are available in the Orchestra Financial Reports or you can save yourself dozens of hours by picking them up by season at the Adaptistration Store.

It is important to remember that the numbers shown do not always convey a complete compensation picture. For example, an executive director may have had a large increase in salary due to a severance or deferred compensation package owed when the position was vacated. Additionally, the documents used to gather figures do not indicate how much of the season an individual received a salary. As such, the cumulative compensation may artificially inflate annual earnings.

Conversely, reported figures may not reflect bonuses or other incentive payments, therefore underreporting what executives may actually earn. As such, the cumulative compensation executives may differ from what is listed. 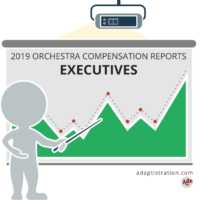