As is the case with every annual orchestra compensation report, the most important element to keep in mind is these figures encompass the 2014/15 season and not the current season. Although it isn’t unusual to expect that the most recent figures available would cover the previous season, that’s not how things work thanks to these reasons:

The result is the most recent season available with data for every potential orchestra in these reports is two seasons behind the current season. 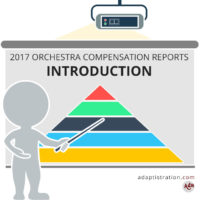 Since its inception in 2005, the purpose of the Orchestra Compensation Reports is to help reinforce the value of transparency and inspire patrons to create a stronger connection with their local orchestra and how it functions.

The 2017 reports are the first time all the routine talking points on ethics and transparency are simultaneously the focus of nearly daily national media attention on the current presidential administration.

One of the central elements in the discussions here and at the national level is what, precisely, constitutes as acceptable levels of transparency.

As a 501(c)3, orchestras are required to report information for officers, directors, individual trustees, key employees, and highest compensated employees.

Having said that, the information does not always listed in an organization’s 990.

The most common reasons are because a position had one or more employees severing for temporary periods of time, a position was left unfilled during the reporting timeframe, or the key employee doesn’t exist. Good examples of the latter are Symphony Silicon Valley and St. Paul Chamber Orchestra in that neither organization employs a full-time music director. Consequently, it should come as no surprise to see a “not applicable” (NA) value for those groups in the music director compensation report.

Over the past 16 years, this all happens in advance of a report’s publication; but this year will be different.

Considering the heightened sense of national awareness around fiscal transparency, this year’s reports will be published with notes indicating any unreported figures and I’ll be reaching out to those groups with requests for missing information afterward.

The goal is to provide a more realistic sense of how often information is missing and confirm an organization’s commitment to the spirit of compensation transparency.

A follow-up article pointing out the updated chart information will be published after each orchestra has had at least two weeks to provide information.

Requests for information will be sent to any orchestra with a “not reported” compensation value on Monday, 8/7/2017 but if you represent an organization that has unreported information, please know you can reach out directly prior to that date to provide the information using the forms embedded into each article as well as the general contact page.

For those who do, that will be included as a note in the updated chart.

The 2013 Compensation Reports saw the single largest change since they were launched in 2005; namely, the exclusion of base musician compensation figures. Although the reports have always maintained a goal of providing as comprehensive an overview as possible between stakeholder compensation, the year’s reports are still unable to incorporate base musician compensation figures due to the same root problem related to the unreliability of the source data. Hopefully, the American Federation of Musicians (AFM) and its player conferences that gather the data will make necessary corrections and allow those figures to return for next year’s reports. You can learn more about this change in the 2012 Compensation Reports introduction article.