As is the case with every annual orchestra compensation report, the most important element to keep in mind is these figures encompass the 2013/14 season and not the current season. Although it isn’t unusual to expect that the most recent figures available would cover the previous season, that’s not how things work thanks to a few key elements: 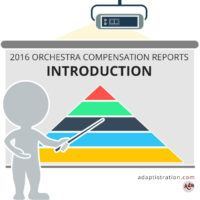 The end result is the most recent season available with data for every potential orchestra in these reports is two seasons behind the current season.

Although we’ll be examining each of the items below in greater detail via their respective report article, you can look forward to the following topics.

The 2013 Compensation Reports saw the single largest change since they were launched in 2005; namely, the exclusion of base musician compensation figures. Although the reports have always maintained a goal of providing as comprehensive an overview as possible between stakeholder compensation, the 2015 reports are still unable to incorporate base musician compensation figures due to the same root problem related to the unreliability of the source data. Hopefully, the American Federation of Musicians (AFM) and its player conferences that gather the data will make necessary corrections and allow those figures to return for next year’s reports. You can learn more about this change in the 2012 Compensation Reports introduction article.