To continue where we left off yesterday, this is Step Three in the series entitled How To Save Classical Music. In this installment we will continue the interview with Klaus Heymann, Chairman of HNH International, the parent company of Naxos.. Today’s installment will focus on the second theme concerning how classical music needs to improve.

2.  We need to find new ways to revitalize classical music organizations, not classical music.
Throughout the interview Klaus repeatedly referred to the fact that classical music is alive and well, it’s only the classical music institutions that are having trouble.  Of all the topics we discussed in the interview, it is this one that most closely pertains to the focus of Adaptistration.    Many of the points Klaus mentioned sounded like they came right from the pages of this weblog.  But what’s important to see here is that there is a wide constituency of individuals that see the problems in a very similar light.

Klaus: Today’s philharmonic societies will have to adapt to this new situation by taking on new functions.  Instead of focusing on having an orchestra’s musicians perform large concerts, their players will need to become more flexible with their expected contract work.  They will need to break into smaller ensembles and play solo recitals more often.

This is an excellent point. During these difficult financial times many orchestras are reducing the number of “big” pieces they program during their season.  Even though this means that orchestras are actually paying a portion of their musicians to stay home, it does reduce the overall expenditures per concert.  But instead of just sending those players home to sit around, orchestra administrators should begin to function more like private artist managers and book solo recitals and small ensembles to perform in suburban communities.  There’s no reason why a brass quintet can’t play on the same evening that the string players are performing an all baroque program in the orchestra’s concert hall.  This will increase public outreach and allow the community to see the players more as individual artists than just cogs in a musical wheel. 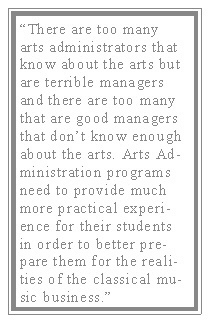 Klaus: But in order for this to work, there is a need for better relations between management and musicians so the later will not feel exploited.  There are too many arts administrators that know about the arts but are terrible managers and there are too many that are good managers that don’t know enough about the arts.  Arts Administration programs need to provide much more practical experience for their students in order to better prepare them for the realities of the classical music business.

That’s been an ongoing discussion here, and one that needs to be addressed if the overall quality of arts managers is going to improve.  The antagonistic relationship between musicians and managers must come to an end if orchestras are going to reach their true potential. And creating a system of cooperation that ensures the musicians will not be exploited but also gives administrators more freedom to manage is paramount.

Klaus: Increased cooperation between organizations in different communities in relatively close geographical proximity could provide many communities with live music that cannot now afford a single full time orchestra.  The groups of musicians would regularly rotate between cities offering performances.

This sounds quite a bit like the franchise orchestra idea presented here back in December.  And to some degree, many orchestras across the country do something like this already, but more locally than what Klaus suggests.  Most opera and ballet orchestras are the core membership of the local symphonic orchestra.  The one distinguishing difference is that the orchestra is contracted by the ballet or opera as a separate entity; they are not combined with respect to administration and funding.  One exception that I’m aware of is the Utah Symphony. They recently merged with the Utah Opera to become a single non profit organization.  They use the same musicians but share an administrative staff and board of trustees.

Klaus: New forms of media and the internet will begin to shape how concerts are structured. As the cost of bandwidth keeps dropping to the point where it will soon cost no more than electricity, it is now possible, both technically and economically, to provide practically any musical content, anywhere, anytime.  Musical performance organizations will have to develop new performance formats to compete with what’s available on the internet.  And if anybody, anywhere in the world, can watch a concert given by the world’s greatest orchestras in first class productions, the majority of performing organizations will have to offer more than just another concert performance.

After Klaus mentioned this I remembered back to the time when I was watching a documentary on the early days of television and how most of the initial programs were simply televised radio shows.  But once the television executives became aware of how much the visual element impacted the program they quickly began to change the format of the popular radio shows that crossed over to the television medium.  Orchestras would be wise to learn from these lessons and discover how to adapt programming formats used by broadcast mediums such as television to help change the basic format of how to structure a live orchestra concert.

Another large benefit to this new approach is that smaller communities will be more capable of developing world class quality ensembles.  A short while ago I wrote an article about the artificial restrictions the industry places on orchestras that aren’t located in a major metropolis.  Unfortunately, that mentality wastes the historically high level of artistic talent currently entering the orchestra workforce.

I remember reading an article in the Pittsburgh Post-Gazette by Andrew Druckenbrod where he interviewed the outgoing Pittsburgh Symphony music director Mariss Jansons.  In the article Jansons says “Nobody can answer what’s the capacity of the music life of this city. Are there enough people here; more that would come; or is this our limit? The people who like the Pittsburgh Symphony and support it are good, but I am speaking generally of the full city. I am not sure people recognize the value of this orchestra, including the leaders.  The city and society should think more how to build culture in general.  Small cities can sometimes be so attractive, so musical. It is not the size, it is your attitude.”

It’s that last sentence that really catches you and connects to many of these ideas.  And the proper use of new technology will hopefully allow Americans to realize the true cultural potential.  Given the ability for anyone to be able to listen to the Oregon Symphony one evening and the Chicago Symphony the next, they will have the control to judge for themselves which orchestras they think are better – and they’ll vote for those groups with their ratings.

Here’s what some of the people from the Naxos ‘Saving Classical Music Competition’ thought about revitalizing classical music organizations:

I invite you to return tomorrow where we’ll continue with the final installment of an Interview With Klaus Heymann and explore point three: “Marketing and Audience Development.”  Tomorrow’s installment will also include some additional comments and observations from Klaus regarding whether or not he feels the situation for most American orchestras will need to get worse before thy can get better.