In particular, the musicians and management at the Nashville Symphony, Phoenix Symphony, Kansas City Symphony, and the Saint Paul Chamber Orchestra (SPCO) recently completed collective bargaining agreements. What enables these groups to stand out from other organizations is each organization settled a new agreement that lasts for at least four years (which is longer than the business average) and provides double digit increases in base musician compensation. Even more unusual is that some have front-loaded contracts (meaning the largest increases take place in the early years of the agreement as opposed to one big “balloon” increase at the end).

These contracts are all positive signs that some within the business are moving in a good direction. At the same time, it is no secret that contracts can always be re-opened if the organization’s board is not able to meet its financial obligations.

As such, among these four ensembles, I think Nashville is the best bet when it comes to meeting its obligations provided they are able to maintain a steady revenue stream after the initial years in their new venue (we’ll look into how they’re doing in the fall). Does that mean I expect the other agreements to be nothing more than economic pacifiers designed to keep musicians quiet? Not at all; instead, none of those groups have demonstrated the sort of advances in revenue and ticket sales that Nashville has over the past few years. That doesn’t mean they aren’t capable of it but it does mean they will need to do better than they have in the past in order to make good on their obligations.

The following chart illustrates the basic economic improvements for each respective organization:

It is especially heartening to see the SPCO getting back into the game. At the same time, it is worthwhile to see where their new agreement stands with regard to parity. If you are not familiar with parity it is a term which is used more and more these days since so many musicians have accepted concessionary contracts over the past several years.

Parity is the functional equivalence of an increase in compensation that compensates for any losses via a concessionary agreement. For example, imagine an orchestra which agreed on a three year collective bargaining agreement with each year providing a three percent increase in base compensation for musicians. Now imagine that this orchestra’s board persuaded the musicians to reopen that contract after year with a request to lower base compensation by two percent for year two. If the musicians still want to end up with a base compensation figure equal to what they would have been paid at the end of the original contract, they would need to persuade the board to agree on a 7.6 percent increase in the final year (otherwise known as a back-loaded contract).

In addition to counteracting dips in compensation, parity can also use the rate of inflation as a benchmark for expected gains. For example, before the musicians of the SPCO accepted a concessionary contract at the beginning of 03-04 season, they experienced improvements in base compensation levels which just exceeded a standard three percent rate of inflation for four straight seasons.

As a result, the concessions they accepted were so large that the double-digit increases in their new contract still put them behind parity. The chart below illustrates this event, the blue line represents where the SPCO base musician salary would have been from the point of the concessionary contract through the 2011/2012 season with a steady three percent increase (akin to the rate of inflation). The red line represents where the SPCO base musician salary started in the first year of their concessionary contract and the green line represents improvements in the recently completed contract. 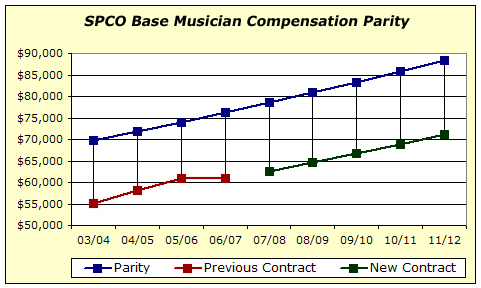 You can see that even with the expected 14.12 percent increase in weekly salary, the SPCO musicians will not yet to reach parity by the end of the new collective bargaining agreement. Whether or not they will by the end of a subsequent collective bargaining agreement is something the SPCO musicians and management will undoubtedly work out at a later date.

One of the most useful applications for increases in base musician compensation figures is to determine if an organization is “moving to the next tier,” meaning, are they swapping out one peer group for another.

In the case of Nashville, the new agreement nearly places them on tack to reaching the minimum threshold for the base musician compensation component from the “All About Potential” series of articles which appeared last April. Based on the predictions from that article, the Nashville Symphony will nearly reach its potential by 2014 if they continue from the 2011/2012 season to the 2014/2015 season with the same average rate of growth in base musician salary as their new master agreement. In the end, this would move Nashville up by at least two rungs into the same league of orchestra currently occupied by ensembles in Detroit, Pittsburgh, and Minnesota.

Naturally, more money in musicians’ pockets does not guarantee they will deliver a better artistic product. Each of the musicians who perform in ensembles which recently completed the collective bargaining agreements mentioned above will have to earn that pay, meaning, they will need to not only need to refine their own skills but learn how to improve the way they work with their colleagues and create a healthy artistic work environment capable of allowing them to create something that is greater than the sum of their parts.

I can almost hear some of the readers wondering aloud “how do they do that?” I think that’s an excellent question but one which will have to wait until another time. So in the meantime, stay tuned…

1 thought on “Some Good News”

New Details About The Louisville Negotiations

304 min
An Initial Look At The Jacksonville Lockout