Since Adaptistration’s inaugural post in 2003, the business has witnessed a number of destructive conflicts between stakeholders over which course of action the organization should engage to best navigate challenging environments. Consequently, it doesn’t take long to begin identifying patterns and although they are filled with the latest trendy bits of business idioms, the underlying patterns remain mostly unchanged. In a sense, it is the same old pig with a new shade of lipstick, all of which can be summed up in the following 10 steps… 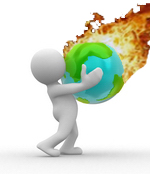 The most recent example of this is the Columbus Symphony Orchestra (CSO) which completed the final step last week with the announcement that executive director, Tony Beadle, is leaving the organization at the end of August, 2009. As is the case in Columbus, the truly sad part of this cycle is those responsible for initiating this sort of scorched earth policy always end up abdicating their responsibility to the organization shortly after expending significant amounts of time and energy dismantling it.

As a result, I hope this sardonic list can serve as a warning to executive board members and executive administrators. In short, if you’re sincerely considering a plan of action similar to the one above, then please do your organization – and the entire field – a favor and simply resign and offer what support you can from a non-governing role. Granted, this doesn’t actively solve any of the problems you perceive exist but the organization may fare better by allowing a new leadership team the opportunity to tackle the problem from a fresh perspective.

Case in point, would the situation in Columbus be different today if the board chair and executive director responsible for concocting and implementing their scorched earth policy simply resigned? Maybe yes, maybe no but it is likely that the organization wouldn’t have lost a passionate music director who was well liked by patrons and musicians alike. Instead, the organization is now without any figurehead to help rally support throughout the community and any incoming board and administrator leaders will have to conduct operations in the charred working environment of their predecessors. Meanwhile, the patrons and fellow remaining stakeholders are left to eke out a cultural existence in the same bleak environment.

X
A Question Of Live MusicArtistic AdministrationAmidst all of the recent news about smaller budget opera and ballet organizations cutting back and cancelling operations, I decided to find out what g…

262 min
X
Putting Out Some FiresFeaturedYesterday's article generated a good bit of direct email messages from managers across the country. Some enjoyed the article and found it enormously u…
Send this to a friend