With the exception of where concertmasters fell in the overall Top 10 earners, the 2009/10 season was a wholly unremarkable year for concertmaster compensation. Based on the figures available (which are fewer than executives or music directors, but more on that later), the average concertmaster experienced a marginal decrease of 1.9 percent in annual compensation.

Due to the changes in the IRS Form 990, there are fewer concertmaster figures to report as compared to executives and music directors. Up until the 2008/09 season, nonprofit organizations were required to list a fixed number of employees who earned over $50,000/year, but the IRS increased that threshold to $100,000 for the 2008/09 season.

As a result, if you don’t see a particular orchestra in the list, it most likely indicates… 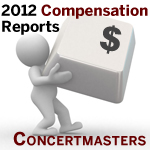 WHO IS THIS CONCERTMASTER PERSON?

It is important to remember that the numbers shown do not always convey a complete compensation picture. For example, a concertmaster may have had a large increase in salary because they had twice the number of featured solo appearances for this season compared to last. Likewise, they may have left the position after the 2009/10 season and, per terms of their individual contract, received a sizeable severance or deferred compensation package. As such, the cumulative compensation reported under those conditions may artificially inflate or reduce annual earnings.

If a group isn’t listed, it means their respective 990 did not include any concertmaster compensation information.