The response to last week’s Minnesota Orchestra poll was terrific and it is currently one of Adaptistration’s most popular. Designed to measure respondent’s thoughts on the Minnesota Orchestra Association’s (MOA) near future expectations, stakeholder actions, and music director involvement, the results produced some intriguing data.

Perhaps unsurprisingly, few respondents expected the work stoppage to resolve before the end of summer. So if you’re considering purchasing tickets for any summer events, your best bet is to plan on buying at the door. 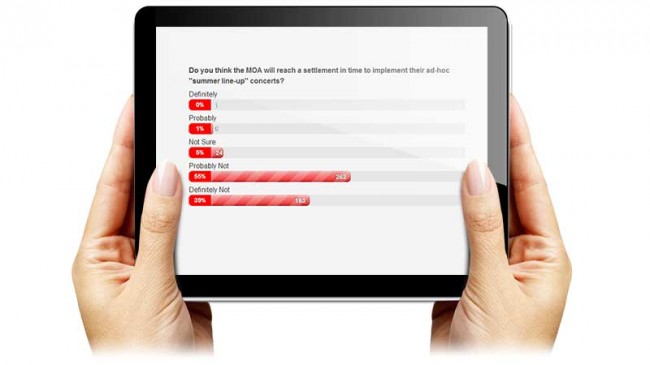 Onto the pricklier topic of what will happen if the work stoppage continues into September, there’s no clear majority among respondents on whether or not they think the MOA will attempt to hire replacement musicians. At the same time, the overwhelming majority felt that doing so would be the wrong move. 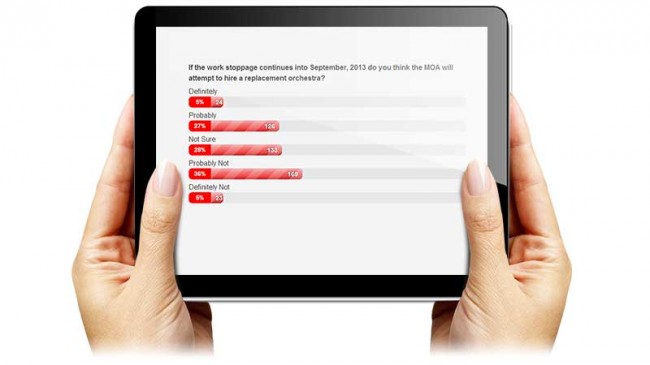 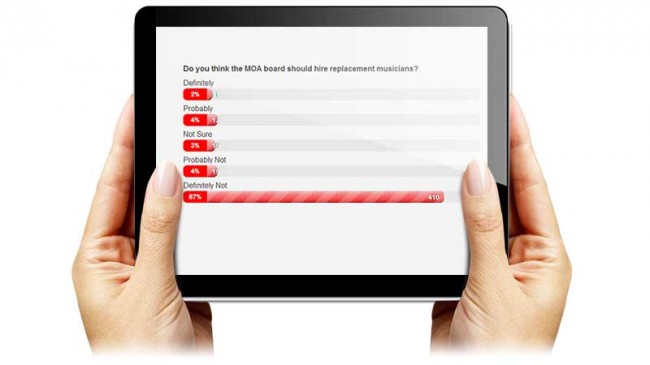 If nothing else, the vehement blowback from musicians and patrons toward the Louisville Orchestra when they attempted to hire replacement musicians during their recent work stoppage should give the MOA something to consider if that option is being discussed behind closed doors.

At the same time, respondents had a much greater range of thoughts on whether or not the musicians should simply quit and form their own orchestra. Roughly one third of respondents felt they should to one degree or another, a solid third weren’t certain, while the last third thought it was not the right course of action. 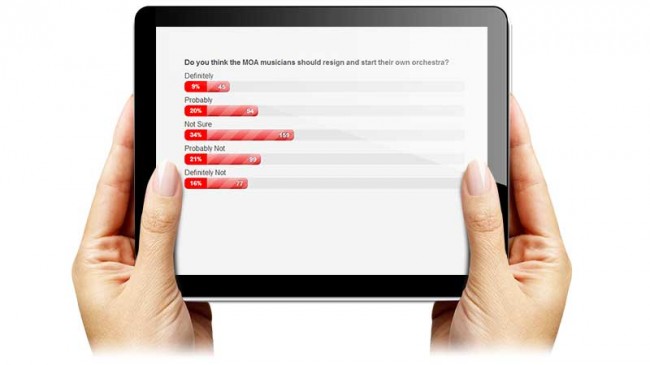 Given the level of hostility, it is perhaps unsurprising that readers had strong feelings about whether the MOA’s executive leadership team should stay or go. By and large, respondents felt that the employer was most culpable for the loss of the 2012/13 subscription season.

Nearly two thirds felt the MOA Executive Board and/or President & CEO bore the lion’s share of responsibility while only a handful of respondents felt the musicians were to blame and a slightly higher share thought everyone was equally culpable. Less than one percent felt music director Osmo Vänskä shared any responsibility. 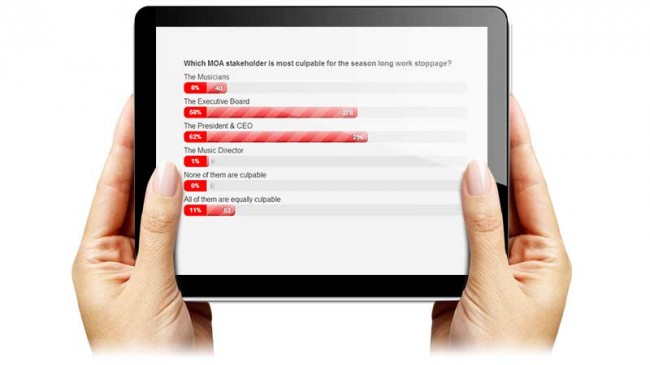 Consequently, the majority of respondents felt the MOA executive committee, negotiating committee, and President & CEO should resign. It’s worth noting, however, that the latter stakeholder garnered the strongest sentiment with a solid 82 percent indicating that he should definitely resign. 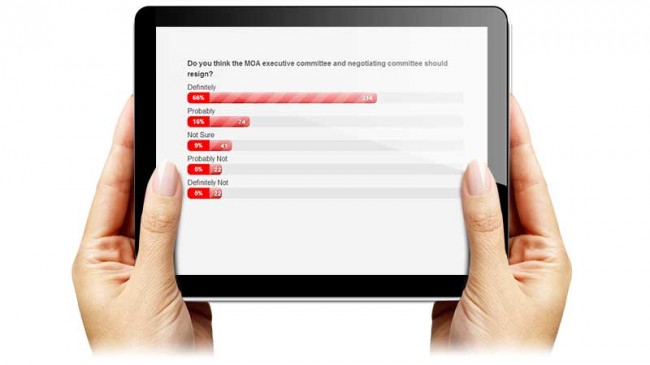 It appears that respondents are prepared for the end of music director Osmo Vänskä’s tenure by September, 2013 although smaller percentages are simply unsure. 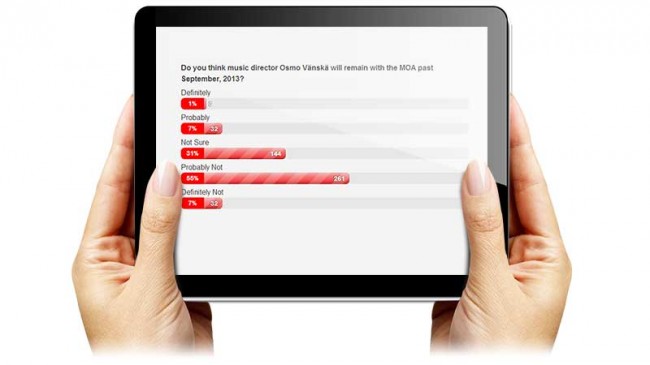 What’s intriguing here, however, is the degree of uncertainty on whether or not the MOA will take a proactive approach and dismiss Vänskä before his self imposed resignation deadline arrives. According to respondents, there was a slight tendency to favor the direction of the MOA striking first. 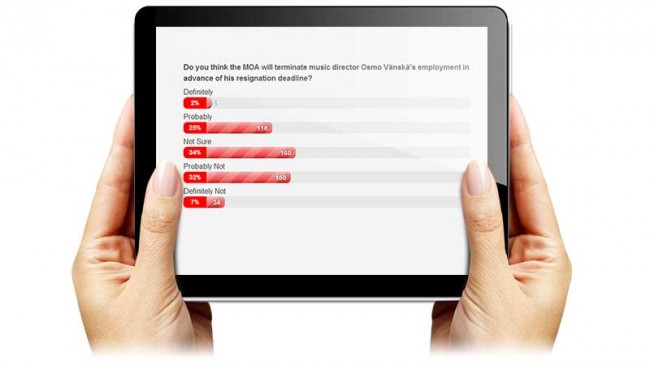 Perhaps the most fascinating result is even though a statistically insignificant number of respondents listed the music director as one of the stakeholders most culpable for the work stoppage; a little more than a third still feel he could be doing more to bring about resolution. Roughly the same ratio feels that there’s not much more he could do. 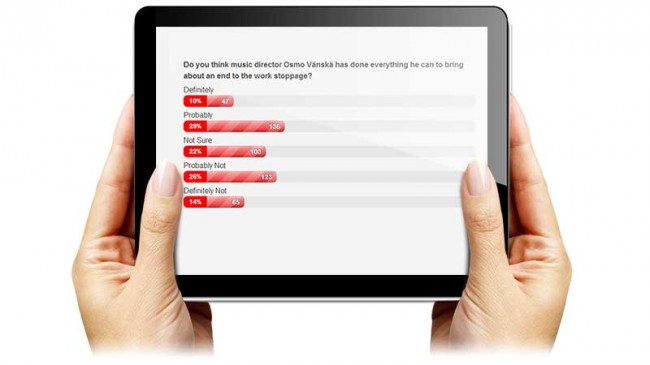 If the MOA labor dispute were a Western, we would be at the part where someone utters “this town ain’t big enough for the both of us” thereby triggering a last-man standing showdown or one of the main characters packing up and riding off into the sunset.

3 thoughts on “What To Make Of The Minnesota Poll Results”