Hugh Sung is a classical pianist, techie, and author dedicated to helping folks discover the joy of making music. At the end of 2015, he launched A Musical Life podcast which includes interviews with the likes of Jennifer Higdon and David Kim but his most recent episode includes a 55 minute interview with Neo Classical author and Chattanooga Symphony & Opera concertmaster, Holly Mulcahy. 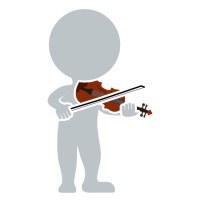 The interview dives into areas of Mulcahy’s atypical 20+ year career path where she has been a pioneer in areas that ultimately became hot topics throughout the orchestra field. Among those is the value of connecting with the audience in ways beyond the artistic.

For the last decade, the administrative side of the field has been pushing for musician job descriptions that include non-artistic responsibilities, such as communication and outreach skills. This seemingly straightforward addition becomes mired in conflict thanks to those qualities rarely being paired with necessary responsibility, authority, or compensation. As a result, most of these discussions end up coming across as “do all of this other stuff for no additional pay and we want to use it for determining which musicians win/lose jobs based on administrator-only judgment.”

Perhaps unsurprisingly, these efforts generally land with disingenuous affect among many musicians. The end result is a good idea that dies an ugly death due to poor design and even worse implementation.

If you have ever pondered this quandary, then you’re going to find that segment of the interview particularly uplifting (especially the 41:45 mark).

You can jump into the beginning of that segment around the 34-minute mark and know that it dovetails into another fascinating section about the connection between leadership (artistic and administrative) and job satisfaction, a regular topic here at Adaptistration.

Granted, when it comes to Mulcahy I’m decidedly a biased opinion, so take that into consideration. But anyone from the outside looking in can see how she has managed to not only tap into solutions that have otherwise eluded many of the top minds tackling these problems, but is successfully implementing them.

In Mulcahy’s case, her hands-on approach means none of this is academic; she’s not just talking with Sung about ideas but what she’s already accomplished. As such, I have to believe that is one of several factors that contribute to Sung describing her as the “Queen of Classical Music Culture.”

Listen To The Podcast
FacebookLinkedInEmailCopyPrint