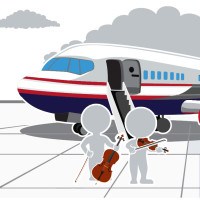 For all of the talk from United Airlines CEO, Oscar Munoz, about “doing better” in the wake of an incident that left a passenger injured, that message doesn’t seem to be reaching all of their employees. Case in point, violinist Yennifer Correia’s recent ordeal where a United Airlines supervisor allegedly attempted to wrestle away her late 1700s violin after she refused to let them check it.

airAccording to a report in the 6/6/2017 edition of the Washington Post by Cleve R. Wootson Jr., Correia’s attorney asserts the supervisor injured one of her hands during the altercation.

The article reports that when faced with the option of being barred from bringing her violin on the plane, Correia immediately attempted to find an alternative, even if it meant shouldering any additional costs herself.

“I can’t not take my violin on board. I’ll pay the money. I’ll take another flight. Just tell me what I can do.”

Sadly, this is just the latest in what appears to be an unending stream of incidents where airlines aren’t properly training their employees (as well as those from providers) on federal regulations that provide for conditions were musicians can bring instrument cases on board aircraft as carry-on luggage.

Or perhaps they simply don’t care enough to offer up anything beyond lip service.

After all, if former Continental Airline CEO Gordon Bethune is comfortable enough to go on television and assert that passengers can get upset all they want, that won’t change the way airlines operate, you can see where motivation to improve is low. At the same time, a series of successful lawsuits may be enough to change that attitude. Time will tell.