For the second year in a row, the average Music Director of an ICSOM ensemble experienced the smallest real average percent increase when compared to the other stakeholder groups. Granted, those figures continue to be skewed a bit since several of the larger budget orchestras did not have a full time music director during the 2007/08 season, but it stands in stark contrast to executive gains in the same season… 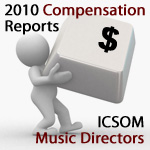 In order to obtain a clearer picture of changes in average compensation, compensation data from orchestras that did not pay a music director for an entire season or paid an incoming and outgoing music directors in the same season are factored into a “real average.” Although this is not a definitive figure, it does assist in proving a more comprehensive picture of compensation.

When applied to this year’s data the average change in music director compensation goes from 6.54 to 0.02 percent, which makes them the stakeholder with the smallest gain during the 2007/08 season. At the same time, the drop is due in large part because of the increase in vacant big budget music director positions (Chicago, Dallas, Detroit, and Pittsburgh), all of which were filled in subsequent seasons.

MAKE OF IT WHAT YOU WILL

The 2007/08 season was an odd one for music directors. Nearly a quarter of ensembles were without a full time music director or were in the midst of an incoming/outgoing transition. Certainly, this had an impact on averages but at the same time, the enduring debate surrounding the return on investment for music directors is alive and well. Hindsight tells us that since these figures from the 2007/08 season, a number of orchestras decided against renewing their music director’s contract as a result of non-artistic issues.

Undoubtedly, the debate surrounding music director compensation levels, “new economy” motivated duties and responsibilities, and whether or not it produces a justifiable return on investment won’t end any time soon. At least, not until the economy stabilizes.