Although they didn’t enjoy nearly as large of an increase in compensation as their ROPA peers, the average ROPA executive still managed to outpace inflation by a healthy margin. Comparatively, the 2007/08 season produced the highest percent increase in average compensation since the 2002/03 season… 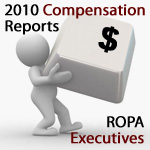 It is important to remember that the numbers shown do not always convey a complete compensation picture. For example, an orchestra executive may have had a large increase in salary due to a contractually mandatory severance or deferred compensation package. Additionally, if any executive was not employed for a full season, the documents used to gather this data do not indicate how much of the season the individual received a salary. As such, the cumulative compensation may artificially inflate annual earnings. Conversely, reported figures may not reflect bonuses or other incentive payments and may therefore underreport what executives actually earn; therefore, the cumulative compensation for executive directors may or may not be more than what is listed.

As for Regional Orchestra Player Association (ROPA) musicians, unlike the vast majority of their peers in International Conference of Symphony and Opera Musicians (ICSOM) ensembles who all earn no less than the musician base salary, all ROPA ensembles use a tiered system of salary and/or per service payments. For example, although the Richmond Symphony may list a base musician salary of $29,415, more than 60 percent of the musicians earn less than that base salary figure. Those players are paid via sliding per service tier system and may earn as little as a few thousand dollars per season.

In order to obtain a clearer picture of changes in average compensation, compensation data from orchestras that did not pay an executive for an entire season or paid an incoming and outgoing executive in the same season are factored into a “real average.” Although this is not a definitive figure, it does assist in proving a more comprehensive picture of compensation. When applied to this year’s data the average change in executive compensation increased from 6.56 to 7.16 percent.

ARE HINDSIGHT AND CONTEXT MUTUALLY EXCLUSIVE?

Although average ROPA executives didn’t enjoy as large of an increase as their ICSOM peers, they still managed to outpace other stakeholders in this category by sizeable margins. As was mentioned in the onset of this report, executive compensation levels for the 2007/08 season are representative of attitudes dominating the height of the economic bubble. At the same time and shortly after the economic downturn, a number of executives voluntarily implemented cuts to their own compensation as a first step toward enacting pay cuts throughout the entire organization.

A common approach in that cost control practice has been to espouse a policy of shared pain, meaning all stakeholders should absorb equal percentage cuts. So if the CEO takes a 10 percent pay cut, so should the majority of staff and artistic stakeholders. That very notion was presented here at Adaptistration as a recommend practice in an article from January, 2009 entitled A Meaningful Approach To Concessions.

At the same time, it is beneficial to consider cuts in a dynamic perspective. For instance, if an orchestra’s CEO and musicians agree to accept matching reductions in compensation, it is fair to examine the past several years of changes in compensation in order to compensate for spikes in either direction.

Ultimately, an organization’s stakeholders will need to determine if this historical perspective has any impact on whether or not the purported equal pay cut is indeed, equal. Likewise, executive board members would benefit from taking these variables into consideration not only during annual executive reviews but during the initial stages of the planning process associated with sudden economic adjustments.