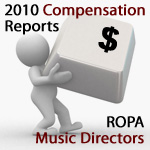 As for Regional Orchestra Player Association (ROPA) musicians, unlike the vast majority of their peers in International Conference of Symphony and Opera Musicians (ICSOM) ensembles who all earn no less than the musician base salary, all ROPA ensembles use a tiered system of salary and/or per service payments. For example, although the Richmond Symphony may list a base musician salary of $29,415, more than 60 percent of the musicians earn less than that base salary figure. Those players are paid via sliding per service tier system and may earn as little as a few thousand dollars per season.

In order to obtain a clearer picture of changes in average compensation, compensation data from orchestras that did not pay a music director for an entire season or paid incoming and outgoing music directors in the same season are factored into a “real average.” Although this is not a definitive figure, it does assist in proving a more comprehensive picture of compensation. When applied to this year’s data the average change in music director compensation increased from 1.02 to 6.90 percent.

A PICTURE IS WORTH A THOUSAND WORDS

This chart isn’t presented with any subtext, messages between the lines, or sensational overtones. It simply is what it is: a graphic illustration of statistics.