The 2007/08 season was an odd year for concertmaster compensation. Although one individual shattered previous all time high records, it was due in most part to undisclosed terms related to contract buyout. At the same time, the second highest paid concertmaster still beat last year’s high by a few thousand dollars. Overall, the average concertmaster enjoyed a higher than normal bump in annual compensation…

WHO IS THIS CONCERTMASTER PERSON? 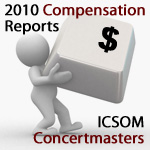 Although concertmasters are included within every orchestra’s collective bargaining agreement, they also negotiate a separate contract with the orchestra detailing compensation and additional duties exclusive to their position. For example, it isn’t uncommon for a concertmaster to be featured as a soloist with their orchestra at least once a year. As such, their annual income will fluctuate based on the number of solo appearances they negotiate with their organization.

Additionally, concertmasters are required to perform any of the numerous internal solos incorporated into any given piece of music (such as the famous violin solo from Scheherazade). Beyond actual performing duties, concertmasters (along with other principal seat string musicians) are usually required to perform some additional duties such as bowings. Bowings are markings placed throughout a string player’s sheet music that indicate which direction to move the bow. This allows each section of strings to move their bows in unison and enhance to the sense of phrasing a conductor wishes to use.

A common perk associated with many concertmaster personal contracts are clauses excluding them from having to perform during some non-masterwork oriented concerts (such as holiday, pops, or educational concerts). As this clause is not uniform, the frequency and type of concerts concertmasters are excluded from participating in vary from one musician to the next. It is also one of the reasons why orchestras may have one or two additional violinists within the orchestra who serve under the title of associate or assistant concertmaster.

WHERE THE NUMBERS COME FROM

All data presented in these reports coincide with the corresponding documentation from the 2007/08 season. In order to provide information that is as accurate as possible, data for the 2007/08 season is gathered from the following sources:

It is important to remember that the numbers shown do not always convey a complete compensation picture. For example, a concertmaster may have had a large increase in salary because they had twice the number of featured solo appearances for this season compared to last. Likewise, they may have left the position after the 2007/08 season and, per terms of their individual contract, received a sizeable severance or deferred compensation package. As such, the cumulative compensation reported under those conditions may artificially inflate or reduce annual earnings.

The Base Musician compensation figures do not include any additional payments including but not limited to outreach services and minimum overscale and/or seniority payments, all of which are more common for International conference of Symphony and Opera Musicians (ICSOM) musicians as opposed to their Regional Orchestra Player Association (ROPA) peers. Finally, these figures do not include any of the opera, ballet, or festival orchestras which are members of ICSOM, IGSOBM, or ROPA.

A NOTE ABOUT ROPA CONCERTMASTER FIGURES

ROPA concertmasters have been incorporated into this report due to how few are actually reported on their respective IRS Form 990. There are two primary reasons why this is the case. First, the IRS only requires nonprofit organizations to list the top five employees and private contractors paid over $50,000 on their Form 990. Second, because ROPA musicians earn so much less than their ICSOM peers, there are only a few ROPA ensembles that pay their concertmaster enough to warrant including that individual on the Form 990. Furthermore, concertmasters in other ensembles who do earn over $50,000 may not earn enough to be considered in the top five paid employees.

As a result, there are only a handful of ROPA concertmasters included in this compensation chart; however, due to the nature of how the data is compiled, they have been filtered from the overall averages.

In order to obtain a clearer picture of changes in average compensation, compensation data from orchestras that did not pay a concertmaster for an entire season or paid incoming and outgoing concertmasters in the same season are factored into a “real average.” Although this is not a definitive figure, it does assist in proving a more comprehensive picture of compensation. When applied to this year’s data the average change in concertmaster compensation decreased from 9.41 to 6.12 percent.