The 2009/10 season was one of transition at a number of orchestras, especially the larger budget organizations. Several groups were amidst music director changes and/or in the middle of interim leadership and without those larger figures, the cumulative average compensation was lower than the previous season. However, if you remove the Top 10 Total Expenditure groups from the mix from both seasons, it is a different story. 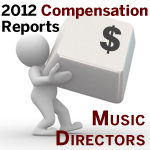 Furthermore, these figures may not reflect bonuses or other incentive payments, therefore underreporting what conductors may actually earn nor do they include combined salary figures for conductors serving as music director for more than one orchestra. Also missing from the figures are expense accounts and other perks; as such, the cumulative compensation for music directors may or may not be more than what is listed. Additionally, the documents used to gather data do not indicate how much of the season an individual received a salary. As such, excessive differences in the change from the previous season’s compensation may be artificially adjusted.

Finally, in instances where music directors also perform as a featured soloist with their ensemble, these fees are sometimes negotiated under separate contract and reported separately yet for others, they are included in their music director contract.