ASO Management and ASOPA to Use Same Mediator As Metropolitan Opera

“We are pleased that after weeks of an open offer, the musicians’ union has accepted mediation and we’re looking forward to getting back to the negotiating table,” said Stanley Romanstein, ASO President and CEO.  “We are ready to resolve our differences and start the ASO’s 70th Anniversary Season.”

ASOPA and Orchestra management failed to reach an agreement on a new contract before the expiration date of 11:59 pm on Saturday, September 6, 2014. The musicians have been locked out since that time, which caused the opening of the 2014-15 season to be postponed and concerts canceled through November 8, 2014.

Once an agreement between Orchestra management and ASOPA is reached, the season will be resumed as soon as possible.

“We are all musicians or music enthusiasts at the Atlanta Symphony, and we are all striving for the same thing — a thriving classical music community that will flourish for decades to come,” said Dr. Romanstein. “We hope we can return music to the stage very soon.” 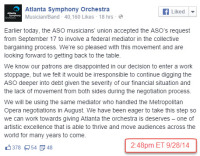 The statement was accompanied by a similar notice at the ASO Facebook page but as it turns out, this was news to the musicians.

Typically, press statements related to mediation are issued by both sides as joint statements or at the very least, mutually agreed upon language with quotes from both representatives which are then distributed by both sides. As it turns out, the ASO’s statement was premature and the musicians issued a concise statement shortly before midnight, 9/27/14 rebuking the ASO for exacerbating tensions by releasing distorted information.

According to the musicians, they did agree to speak with a Federal Mediation and Conciliation Service (FMCS) representative to explore the potential for mediated negotiations but they unequivocally have not yet agreed to proceed with mediation and at the time of the statement, they had yet to hear from the FMCS.

This statement is in response to the Atlanta Symphony Orchestra’s statement issued at approximately 9pm today, September 27th. We wish to correct the misleading information that WAC/ASO management distributed in that statement.

We received a formal request for mediation on Monday, September 22nd at 10:55am from WAC/ASO management. Three hours later, we accepted the suggestion to speak with Ms. Allison Beck, the Acting Director of the Federal Mediation and Conciliation Service, and were told that FMCS officials would be contacting us accordingly, which has not happened yet. Mediation will only be successful if the WAC/ASO management is willing to move off the terms of the demands they have been adamantly clinging to — in bad faith — since they locked us out three weeks ago tonight.

The musicians are happy to speak with FMCS Director Beck about pathways forward when she is able to be in touch with us. There is as yet no further agreement about the process.

Short of the ASO providing documentation that the musicians did agree to mediation, the gaffe goes a long way toward eroding the organization’s credibility.

The 9/28/14 edition of NPR’s Weekend Edition featured a segment by Adam Ragusea that explores some of the historical context of philanthropic giving among Atlanta’s big money sources as well as what might be best defined as some curious statements from ASO CEO Stanley Romanstein explaining why the organization has lower than average levels of earned income. In short, he blames that on low ticket prices.

Atlanta’s ticket revenue is also lackluster, though Romanstein contends that’s not because of poor attendance.

Romanstein apparently did not provide any supporting documentation for this statement nor was there any mention of audited ticket sale figures and/or average attendance rates since he assumed his executive position in 2010. Nonetheless, it will be interesting to see if the institution releases detailed data related to earned income as well as overall marketing performance (i.e. how much of every dollar earned selling either season or individual tickets is spent on advertising etc.).

Interestingly enough, marketing performance was a crucial element that led to relaxing entrenched positions during the Metropolitan Opera labor dispute which ultimately produced a new agreement and prevented cancelling any scheduled event activity.

5 thoughts on “The Situation In Atlanta Continues To Degrade”