While discussion about musician stage dress, especially tuxedos, is nothing new that doesn’t mean the topic is stale. For example, most know that tuxedos have been a part of orchestra musician attire for a century, but how long has the tuxedo itself been around and why did orchestras adopt it?

That critical point gets overlooked more often than not but violinist Holly Mulcahy decided to take a deep dive into the history of the tuxedo and by the end of the discovery, it turns out there’s even less reasons why orchestras should continue to hook their attire wagon to that long-faded star.

The tuxedo was born in England about 1860 at the request of the Prince of Wales, who later became King Edward VII. As the story goes, the prince was annoyed with the formality and lack of comfort of the traditional evening attire: white tie, white vest, and tailcoat. He requested his tailor to create something more comfortable. A blue silk tailless evening coat with matching pants was created; it wasn’t called a tuxedo (yet), it was called a smoking jacket.

American coffee tycoon James Brown Potter was visiting the prince and saw this more casual attire during dinner. Potter took the idea back to his hometown, the affluent community of Tuxedo Park in New York.

Soon, this style began to appear in the box seats of the Metropolitan Opera. The “comfortable and casual” smoking jacket was now expected and accepted at formal events. No longer called a smoking jacket, it was formally called a tuxedo, a nod to where it became popular, Tuxedo Park.

It isn’t as though orchestras haven’t explored options (remember this one from the Baltimore Symphony in 2013?), but most end up fading away and I have yet to see one supplant tuxedos. For now, tuxedos continue to remain the dominant form of on-stage attire.

While this isn’t the first time I’ve asked this question, I’m still curious to know when it will require more than one hand to count the number of professional ICSOM or ROPA ensembles to remove tuxedos as their primary attire. In the meantime, orchestras will continue to be prepared to make The Prince of Wales feel comfy if he comes calling. 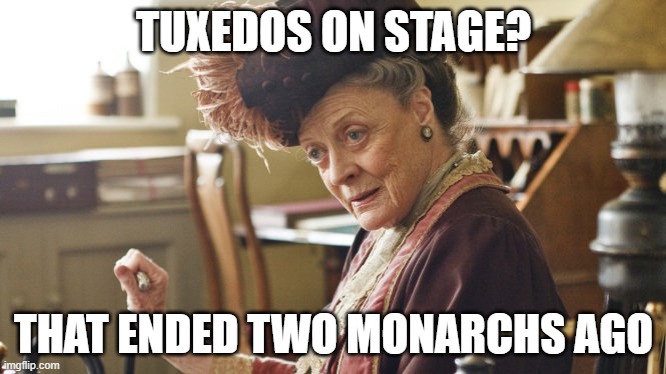 X
Food For Thought: Post-COVID Curtain SpeechesCommentaryI want to toss out a short academic exercise in the form of thinking about how the ubiquitous curtain speech will fit into post-COVID concerts. Even b…

1472 min
X
Why Yes, Talking During Concerts Is Still Annoying AF…CommentaryWhile I can let a number of habits slide when it comes to audience behavior, one that continuously drives me insane is when audience members talk duri…
Send this to a friend